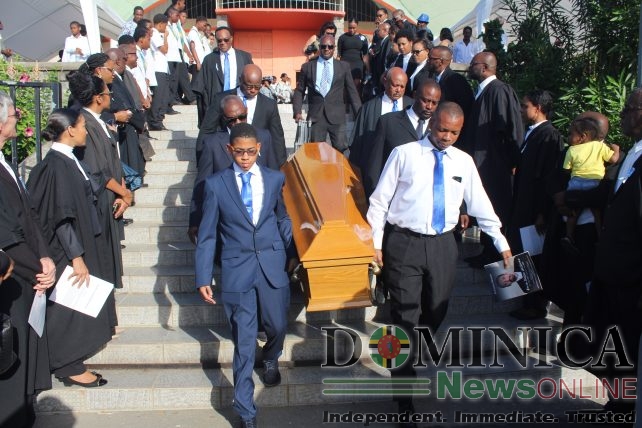 In the eulogy, “Kevo”, as he was affectionately called, was described as “a purist lawyer” who had a truly professional approach to the profession.

“He had a firm understanding of the law and was always willing, even anxious to share his hard-won knowledge with his fellow lawyers, especially the younger ones…yet for all that, he never lost his humanity, his calmness and gentleness which some, who did not know him, could mistake for timidity,” the eulogy stated.

His illness meant having to seek immediate medical attention overseas with the first stop Martinique, the eulogy revealed, “where the doctor said that when he saw patients like Kevo, he would simply tell them to go back to their homes, most certainly to die.”

However, those sentiments were not shared by Williams and his wife, Singoalla.

“From there, they went to London only to be told that he had only about a year to live unless he obtained a new heart. He was able to do that in the United States, where he literally died when his heart stopped during the doctor’s attempt to insert a defibrillator, only for Kevo to spring to life again saying that if they covered him up in the grave, his ‘Bloomie’ (wife) would not be able to find him.”

Williams was able to find a new heart and a new lease of quality life in which he could continue to make a contribution to his family and country for another 20 years.

The eulogy continued, “The way that he lived his life has and will continue to provide an inspiration especially to his children Yasmin and Yannick of an honourable, full and purposeful life in spite of the limitations imposed by ill health.”

It concluded, “He was a perfectionist, whether as a plumber, builder, mechanic, furniture maker, lawyer, father, devoted husband and loving son. Throughout it all, he maintained a calm and calming demeanour, a kindly and generous disposition and a stoic endurance of pain and adversity with a level of dignity and humility which made him a delight to live with.”

Fr. Charles Martin and Monsignor William John-Lewis were the celebrants at the funeral which was attended by resident high court judges Justice Birnie Stephenson and Wynante Adrien-Roberts and the law fraternity.

Monsignor Jno. Lewis called on those present to “reflect on the life of their own mortality” adding that Kevin he said went through suffering and pain but gave love and peace.

“No one knows the duration of his journey here on earth Share love and peace while on earth,” he encouraged.

The body of the late Kevin Williams was laid to rest at the family estate in Colihaut.