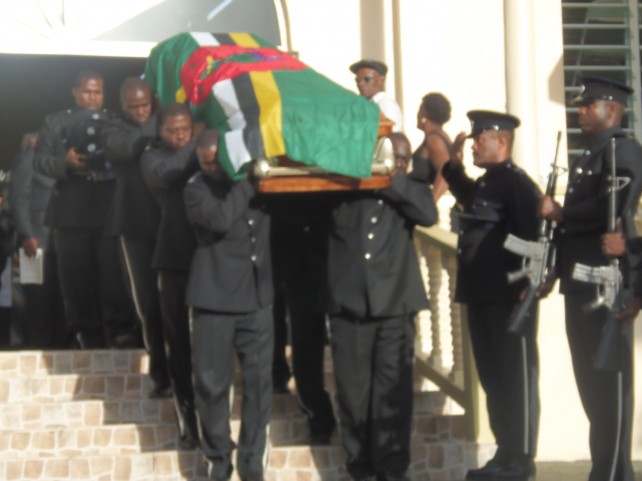 The mood was a solemn one.

The only signs of color were artistic arrangements laid at strategic locations within the four walls of the Mount Wallis Methodist Church in Portsmouth.

The weather also appeared to be in a mourning mood, bringing down occasional showers, as if in tears.

It was the funeral service of the late former president Vernon Lorden Shaw on Saturday.

They slowly marched to the musical notes of ‘Onward Christian Soldiers’ down to the Michael Douglas Boulevard and on to the cemetery.

Among those in the procession were family members, friends, well wishers and officials who came to give an official send off to the once head of state. Among them were the 8th President of the Commonwealth of Dominica Charles Savarin, Prime Minister Roosevelt Skerrit and other cabinet ministers, the leader of the opposition, permanent secretaries and members of the diplomatic corps.

The late president was born on the 13th of May, 1930 and drew his last breath on the 2nd of December, 2013 at the Princess Margaret Hospital.

Vernon Shaw who was a local preacher of the Methodist church, was sworn in as the fifth President of the Commonwealth of Dominica on October 2, 1998 and left office on October 1, 2003.

As he was lowered into his final resting place, the rain came down and merged with the tears of his surviving wife as she laid the first wreath on his tomb.

See photos below of the funeral service.