Prime minister, Roosevelt Skerrit, has made 61 overseas trips in his official capacity from December 20, 2009 “to the present” documents obtained by Dominica News Online have shown.

For the trips, which have been designated as ‘official business,’ the prime minister received advances totaling $273,468.19.

The documents were in response to queries by opposition leader and MP for Salisbury, Hector John, concerning the travels of the prime minister.

They showed that Skerrit has visited countries as diverse as Spain, Brazil, Hong Kong, Greece, Azerbaijan, Turkey, China and Colombia, among others.

Members of the opposition have always questioned the travels of government ministers suggesting that they are exorbitant and are not accounted for.

Speaking in parliament in November 2012, the prime minister rubbished the claims saying that when public officers travel and they use their credit cards, it takes a very long time for the treasury to refund them. “I can say publicly without a shred of contradiction that whenever we travel on business Madam Speaker, in most cases you are out of pocket…” he stated.

He said as prime minister, he receives “$100 US per day for meals and I believe $125 US for out of pocket expense.”

“When I go on state business and I have to meet with people….if I invite business people to my suite to have a meeting and I order room service and that bill comes up to $200 US, I cannot ask the treasury to refund me that. It comes from my out of pocket and meals,” he stated. 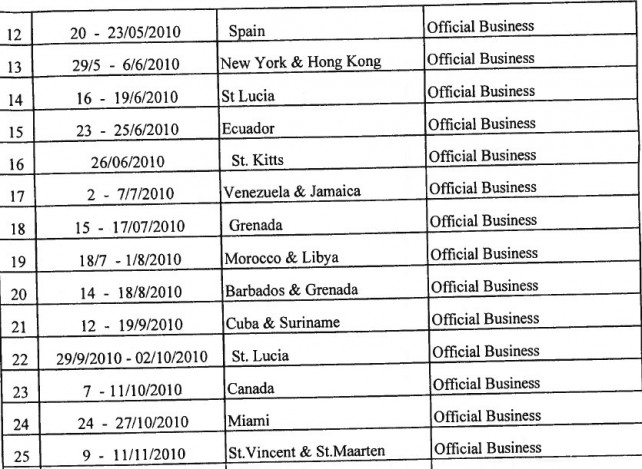 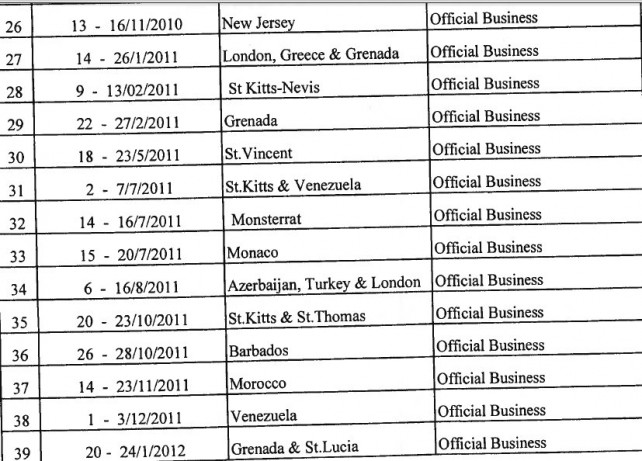