A strange occurrence which took place in the middle of the night in the yard of a Loubiere woman has left her baffled and searching for answers.

Debra Jude claimed that during the incident someone threw a white, foul smelling liquid in her yard and she is of the opinion that there may be some evil involved in the entire matter.

Jude said events began unfolding around midnight on Sunday when she woke up because she heard water flowing from a pipe outside.

“I could also hear somebody throwing water in my yard,” she stated.

She said she woke up, turned off a light that shone in an alley nearby and peered behind the curtains of a window in her bedroom.

“I stood up there for a little while looking to see if I would see somebody because I heard the person,” she stated.

It was then she saw what she described as “something white” on the steps in front of a salon she operates on First Street in Loubiere.

“So I said that cannot be the moonlight because the moon is not that bright,” Jude explained.

Still peering behind the curtain, she said she heard her gate open and she saw the reflection of a man in the window of her neighbor next door. The man, she said, was walking towards Second Avenue.

Overcome with fright, Jude said she stayed rooted to the spot where she was standing.

When she regained her composure she grabbed a flashlight and flashed outside.

“When I flashed, I saw some kind of white water, on my step and I got frightened,” she noted. “I started trembling for a bit because I thought it was some kind of bad thing somebody came and throw in front of my door.”

She stated the smell of the strange white liquid could not be described.

“It was really smelling bad,” Jude said. “A strong smell, funny smell, something I cannot even describe.”

Jude said she eventually called a friend who lives in the yard and told her what was going on.

She remarked that the friend went outside to investigate and reported what she saw.

“She asked me if I had alkalee and I told her yes, I have alkalee,” she said.

Jude stated she got a bucket, threw in some alkalee and salt in it and the mixture was thrown on the white liquid on the step.

“Then the whole thing just turned brown, it turned from white to brown,” she noted.

She said the incident has left her searching for answers although she had noticed in the past white powdery substance on her step.

“I never took it on like something somebody would do,” he stated.

As of Monday morning, the mysterious substance was still on the step.

Jude is convinced that the whole matter has to do with evil.

“I believe somebody that is trying to stop me in my business, I have a little salon and I believe it has to do with jealousy. Somebody doesn’t want to see me prosper,” she noted. “I believe it’s an evil thing because at that time of the night for somebody to come and throw things in my yard, in front of my salon. I don’t think it is a good thing.” 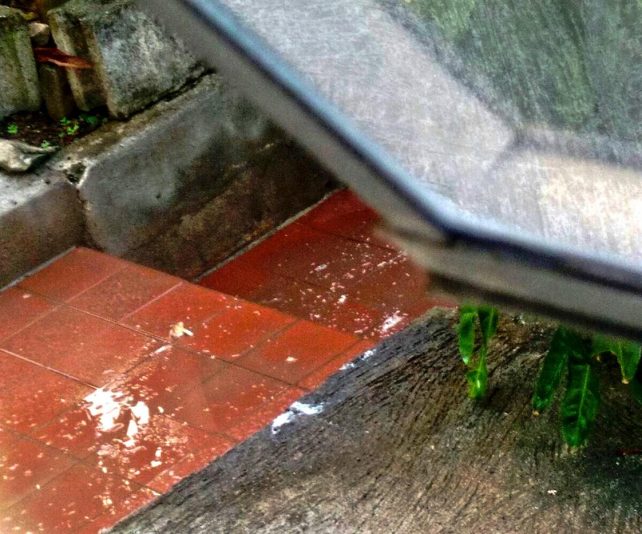