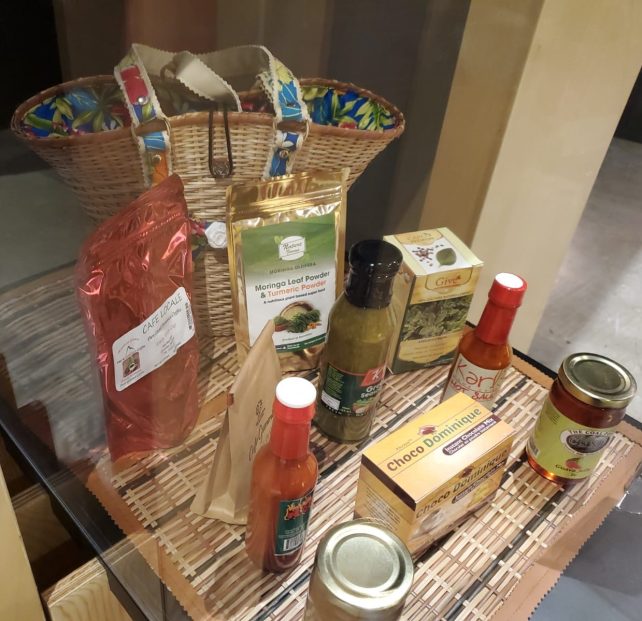 Dominica’s performances and products have been well received by patrons at EXPO 2020 Dubai, according to a member of the committee which is responsible for Dominica’s presence at the event, Lloyd Pascal, Head of DEXIA’s Export Promotion and Development Department.

Dominica is participating, along with over 190 countries, in the six month long event (October 1st  2021- March 31st 2022) dubbed “the world in one place.”  The theme for the Nature Isle’s pavilion at the event is “Experience the Commonwealth of Dominica – the Nature Island of the World Through the Lens of its Culture, Heritage and Traditions”
Dominica’s participation at EXPO 2020 started on Saturday October 16, 2021 with the opening of its pavilion and the Dominica National Day ceremony.
“It’s been a tremendous experience for us. The fact that we were able to meet with so many people from different cultures is one thing but we are also here to present products and to promote Dominica,” Pascal told Dominica’s Media Liaison Officer, Ivona Jno. Baptiste Lugay. “So that it has been a very good experience in terms of people trying to find out what we do best in Dominica. We were able to show them some of these products and at the same time have them sample.”
Pascal said the reviews have been good so far.
“I think we have some very good products. I mean, we already have some quality products and I think we just need to improve on the aspects of quality. We may be missing out on some; maybe our labeling needs to be improved in some cases,” he added.
According to the DEXIA official, there’s also an opportunity to look at joining forces in pepper sauce production for example, to meet the demands in such markets because according to him, “you must be able to be consistent in terms of volumes as no one-supplier can achieve this.”
Meanwhile, Calypsonian Tasha Peltier (Tasha P) who performed at the event, praised the Dominican delegation that represented Dominica at EXPO 2020.
Tasha P hopes that the younger generation will one day have a chance to have the same experience.
“The good that came out of it was exceptional. I must admit the satisfaction came from the actual performance and being with my new team Expo 2020 family. We had a nice Vibe not just during practices or during travels, but we were just hugging each other on stage for the whole 20 minutes,” She revealed. “It was a perfect feeling that I cannot describe and I just wish younger artists in Dominica Will get the opportunity to do something as such or even artists on a whole.”
The singer said she appreciated being chosen as one of the few to take part in the exposition and said this opportunity will open doors for Dominica’s culture to be known globally.
Miranda Langley of the Kalinago Territory also expressed joy at being given the opportunity for the first time, to perform at “this momentous occasion.”
“ It was a great experience for me because I have been to CARIFESTA in the Caribbean, North America and South America, but this is my first time to the Middle East. Their culture is really rich. This gave me a Kalinago…to make my people proud.”
Gerald Langley  is the husband and he also attended as Dominica’s Flag bearer. This was also his visit to Dubai.
“It’s my first time coming that far. I have been to Malta when I was doing a movie with Universal Studios for the Quincentennial story. Saturday was a very historical day for me; it was a big moment and for the first time I was a flag bearer of my country and I felt great,” Langley exclaimed.

He said this exposure will always be  a lifetime story for him, something he will never forget.