A mere three hours of protest action by employees of the Dominica State Prison have borne positive results as the government has agreed to all the demands of the prison officers.

On the morning of September 28, 2021, prison officers gathered on the compound of Dominica’s lone penal institution neglecting some of their duties in a form of protest, a decision they say, was forced upon them due to the government’s  failure to address their most dire concerns.

General Secretary of the Dominica Public Service Union (DPSU),Thomas Letang, told Dominica News Online (DNO)  that attempts made to reach the government to avert the need for any protest action proved futile as decade-old and present concerns of the prison staff were ignored.

Letang referenced two letters sent on September 14, 2020 and February 5, 2021, both of which highlighted the level of disappointment and anger that existed among staff at the prison, “over lack of interest being shown at the highest level with regard to their concerns.”

The DPSU General Secretary said he emphasized the need for a proposed joint meeting and pointed out that to further delay the convening of that meeting would be “irresponsible.”

Among concerns of the prison employees were the nonappointment of acting and temporary staff, the stoppage of certain medical benefits to prison officers, issues with requisition of food supplies, the lack of suitable quarters for both male and female staff which, at present, are not separated, and lack of adequate staffing.

As it relates to Covid-19, to date, 91 of 210 inmates are positive, however, according to the union, these  COVID-positive prisoners are kept among the other inmates and prison staff with no medical care.

“My letters were sent to the Permanent Secretary (PS) and the Minister for National Security and Home Affairs, to the Honorable Minister for Public Service, Secretary to the Cabinet, the Chief Personnel Officer and the Superintendent of Prison, as well as prison officers but the issues were not resolved and we never got a response,” Letang contended.

He said the prison staff informed the Minister and Permanent Secretary of protest action which they were planning and claims that in an attempt to “intimidate them” the authorities met with the employees without their union but, according to the union chief, the employees were not satisfied following the meeting.

“Since that meeting, more issues have surfaced,” he stated. “The prison is understaffed; they have an approved complement of staff of 72 and right now it is 58 and that includes auxiliary staff who by the way, carry out all the duties of prison officers and have been in that non established position for as long as 10 years. This has a lot of implications for them in terms of their gratuity, their  vacation leave, their pay and everything.”

The DPSU head further lamented that while prison employees are interacting with Covid-19 positive inmates, no risk allowance is provided to the officers.

“Right now 15 prison officers have contracted the virus so this situation is very, very bad. There is no separation of those who are positive from those who are negative and the inmates cannot be accommodated at the quarantine facility. So you can see the danger that is involved. The prison officers  have to mingle with them and at the end of the day, the very same prison officers go back to their homes and to their families. So that is dangerous, and something needs to be done,” Letang declared.

He said the nurse at the prison has since fallen ill, so the mates are not receiving any health service.

Letang said on Tuesday, the day of the protest, inmates were fed but no other service was provided by the prison officers.

He vowed that actions would continue until all their issues were addressed. However, a visit by the Permanent Secretary in the Ministry of National Security and Home Affairs during the protest and the holding of an emergency meeting later that same day with the union and prison employees, it now appears that there may not be need for protest action by the prison officers.

He said over 40 prison employees were present and all their concerns were aired and timelines were given for them to be addressed.

“Where it pertained to appointments, we were given the assurance that all recommendations will be submitted for appointments for the Public Service Commission meeting on the 21st of October. With regard to transportation where only one transport is being used by inmates and employees, we were told that before the end of the week, a quotation will be given for the purchase of a new vehicle,” the DPSU official added.

With regard to the Covid-19 outbreak at the prison, an assurance was given that the Ministry of Health will provide training to staff. 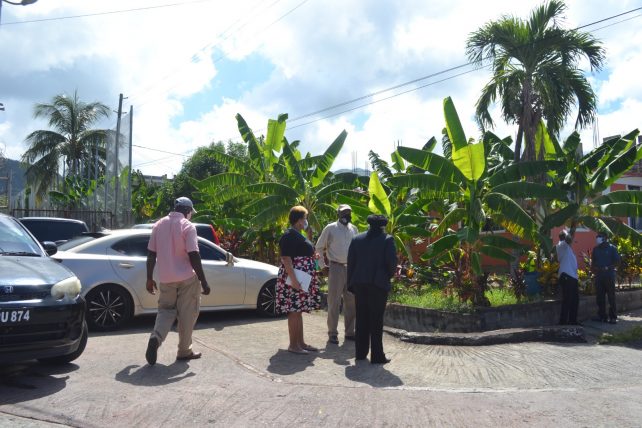