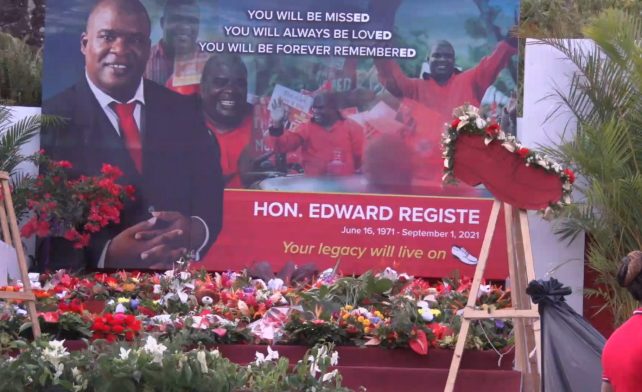 The Grand Bay Primary School, upon completion, will be named after the late Edward Registe.

Prime Minister Roosevelt Skerrit said during a special memorial held in honour of Registe in Grandbay on Saturday that when the school is completed, it shall be renamed the Edward Registe Primary School.

Registe, who was the Parliamentary Representative of the Grandbay Constituency, passed away on September 1st, 2021.

“Ed was also passionate about the rehabilitation of the Grandbay Primary School and it truly pains me that he will not be here to see the results of the project to which he was so committed,” Skerrit said. “This particular project I believe shall be completed in memory of Ed and regarded as a tangible example of the projects he championed while alive.”

The government will also award 5 scholarships in Registe’s honour to to deserving students of the Grandbay Constituency to attend the Pierre Charles Secondary School.

The Prime Minister also said that Registe’s sudden passing has reinforced the government’s commitment to seek to implement the many plans and programmes that he had recommended.

“This I believe is the greatest honour we can pay to Ed, working to help his people achieve their dreams and aspirations for a better and more progressive Grandbay,” Skerrit stated adding that it was obvious from his participation in Cabinet over the past two years, Registe was committed to the development of every single constituent.

“Every corner of this constituency was important to him and he had specific ideas for development in agriculture, infrastructure, education, housing, sports and the care of the elderly…, Skerrit indicated.

From the standpoint of the Dominica Labour Party, Ed was, according to the prime minister, “our strongest voice who rallied the masses together on the campaign trail and embodied the spirit of our party.”

A billboard was also unveiled in Registe’s honour during the weekend memorial.

“I was happy to join his mom yesterday in an unveiling of a billboard that will stand in honour of Ed in his hometown Grandbay,” Prime Minister said during his weekly Annou Pale talk-show on Sunday night.

“It’s only a small part of our plans to keep his legacy alive,” he said. “But it is my hope that it brought some level of comfort and pride to his immediate family and to his constituents.”

Skerrit added, “We will always keep him in our hearts.”

In 2014, Edward Registe was appointed a Dominica Labour Party (DLP) senator and Deputy Speaker of the House of Assembly of Dominica.

He was a former General Secretary of the Dominica Labour Party.

He was appointed Minister of State in the Ministry of Foreign Affairs, International Business and Diaspora Relations, with Specific responsibility for Diaspora Relations in the Roosevelt Skerrit Administration on 17 December 2019.