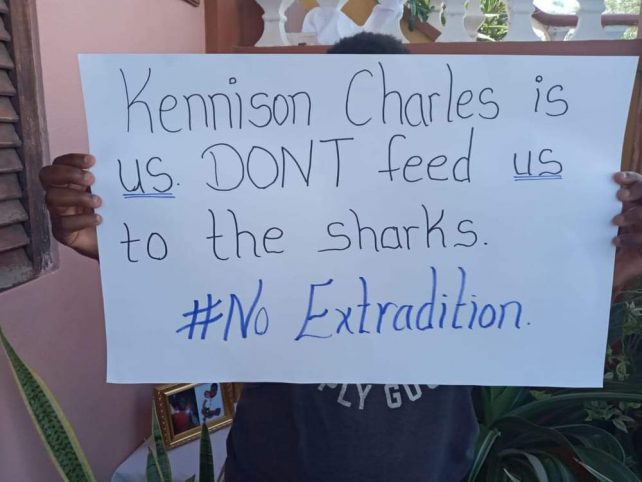 As one man fights possible extradition to the United States Virgin Islands (USVI) for murder and gun-related charges, his fellow residents in Grand Bay are demonstrating their support through protest action.

According to court documents, Kennison Charles is wanted in the USVI on a charge of first-degree murder, of another Dominican Hans ‘Rastaman’ Oliver, which allegedly took place in St.Thomas on March 26, 2016.

Based on the extradition warrant issued by the USA and a Warrant in the First Instance issued by a Dominican Magistrate, Charles was arrested in Grand Bay where he has been residing for the past five years.

He appeared before the magistrates’ court last week and is now remanded at the Dominica State Prison awaiting the court decision on the matter of bail.

However, residents of Grand Bay, unhappy with the extradition proceedings against Charles, have moved beyond social media in voicing their concerns and have staged a peaceful protest in their community, demanding his release.

Armed with placards, the protesters say they want their voices to be heard over Charles’ arrest which they say is an  injustice.

Speaking to Dominica News Online (DNO), one of the organisers who chose to remain anonymous, indicated that through their actions, they are hoping to gain the attention of Dominica’s Prime Minister, Roosevelt Skerrit, the Director of Public Prosecution (DPP) Evelina Baptise and the Attorney General, Levi Peter.

“We know it’s a process, but we are appealing to one of these individuals especially the Prime Minister to stop the process. At the end of the day, if a US citizen was accused of committing a crime in Dominica they would never give up their citizen, so we shouldn’t do the same especially for a matter with no evidence,” she stated.

The protest organiser claimed that the police in the USVI  have little to no evidence against Charles and if he is extradited, justice would not be served.

“If he [Charles] go back, he will not get a fair trial because they are looking to blame someone for the murder. There was the situation with Kenny Mitchel, the Dominican who was killed in Anguilla by an American citizen and America refused to send back their citizen to Anguilla because they said they were concerned about his safety so we are in the same situation,” she stated.

The protester questioned the sudden urgency to have Charles extradited when the alleged crime happened 5 years ago and the warrant that the police were armed with, is months old.

“The police arrested him on February 17 and the warrant is dated November 6, 2020, so why only now? Kennison has been residing in Dominica for 5 years and he is a well respected young man living in Grand Bay. He has no criminal record and is no danger to the community because he is a father of 3 children, the youngest being 6 months old, so we are asking that he be freed from this matter or at least given bail on Tuesday,” the Grand Bay woman  reasoned.

Grand Bay residents have also started an online petition which has already surpassed their targeted number of 600 signatures, which they are hoping to present to the relevant authorities to further plead their case.

When asked about their next course of action if Charles is extradited, the organiser of the protest said they have not thought that far ahead as they are hopeful he will not suffer that fate. 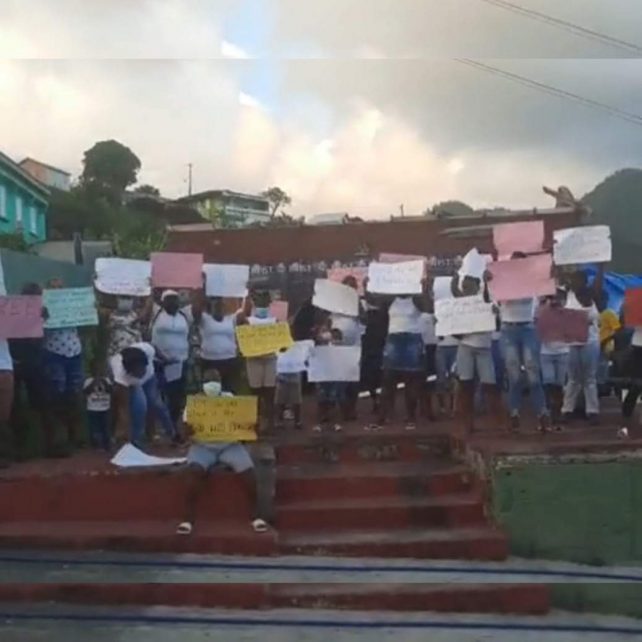