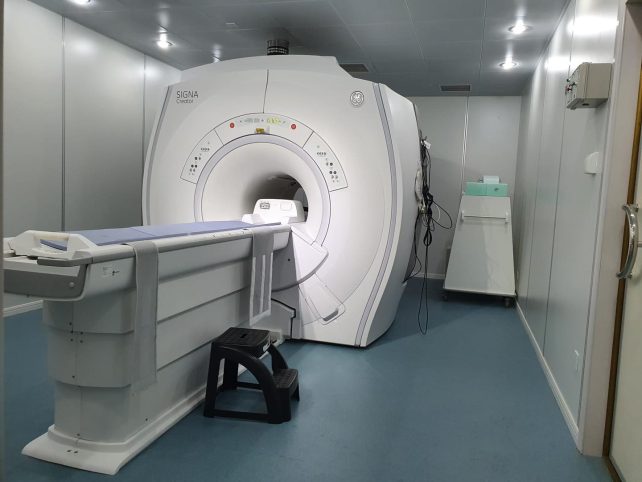 The Dominica-China Friendship Hospital (DCFH) has now commissioned its MRI (Magnetic resonance imaging) service to meet the needs of not only Dominicans, but CARICOM countries and beyond.

Chief Executive Officer (CEO) of the Dominica-China Friendship Hospital, Dr. Dexter James who was delivering remarks at the commissioning ceremony on Friday, said the new MRI machine will provide access to early detection, access to early diagnostics and access to treatment for such medical conditions such as brain tumors, brain injury, strokes and infections, among others.

“In spite of the many distractions around Covid management, the management team continues to work on a number of projects, one of which is the commissioning of the MRI service,” he said. “This project had its own challenges.”

“In spite of the challenges, this week, we were able to move the final area of this installation, the commissioning of the MRI,” he stated and added that over the past 4 days staff had been trained in the conduct of different types of studies on the machine.

A number of patient volunteers participated in the on-site training, according to Dr. James.

He said the DCFH is the only hospital in the OECS territory that owns and operates an MRI in its public health services and will reduce the need for overseas travel for for patients, both from the public and private sectors, who seek diagnostics care.

Dr. James revealed that the current hospital fee structure will be maintained.

“We are not in any position at this point in time, to change the fees and if and when that time comes, by law, there is a process in which that has to be carried out,” he remarked. “So there has been no increase in the fees charged to patients at the Dominica-China Friendship [Hospital].”

A Chinese training team is expected to arrive in Dominica in January/February of 2022 to begin training of doctors and support staff and according to Health Minister, Dr. Irving McIntyre, professionals from other Caribbean islands will also be invited to participate in the training sessions.”

In keeping with the government’s efforts to improve health services, the minister revealed that “as early as next week,” Dominica will sign a Memorandum of Understanding (MOU) with the Brenda Strafford Foundation which he said will make funds available to t5he government to equip the country’s  ophthalmology department with state-of-the-art equipment, “thus making it a centre of excellence for eye care in the region.”

“We are also pursuing a proposal with the University of Michigan, that is the My Heart, Your Heart Program which will enable us to have permanent pacemaker implants done right here at our Dominica-China Friendship Hospital,” he stated.

Dr. McIntyre thanked the People’s Republic of China for the Dominica-China Friendship Hospital which he described as a generous and timely gift, “not just the structure, but the equipment as well.”

Medical Director of the DCFH Dr. Ruby Blanc revealed that the Ministry of Health has, over the past 6 to 8 weeks, completed activation of the machine which culminated this week with application training of four radiographers which was conducted by an application support specialist.

“Our technologists have been exposed to conducting studies of the brain, spine, joints, abdomen and pelvis,” Dr. Blanc noted.

During the week, according to Dr. Blanc, more than 20 patients benefited from an introductory, no-cost service as they presented or consented to participate as volunteers referred by their physicians during that training.

“A small fee of EC$100 was paid so that they could have reports given of the studies done,” she stated.

The Medical Director assured Dominicans that in addition to no longer having to travel overseas for MRI services, the proposed fees will be at least 20% lower than that paid within the region.

She said the Chinese government has donated the MRI machine, the Hifu machine as well as an XRAY unit with a total value of more than EC$10 million.