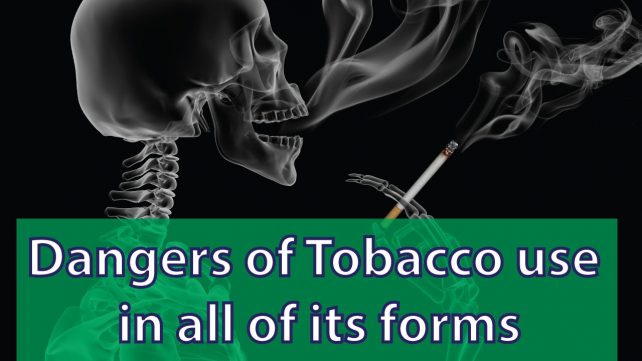 Using the occasion of ‘World No Tobacco Day’ which was celebrated last week under the theme: “Commit to Quit”, Health Minister, Dr. Irving McIntyre reiterated the decades old call to avoid the use of tobacco and its products.

This yearly celebration informs the public on the dangers of using tobacco, the business practices of tobacco companies, what the World Health Organization (WHO) is doing to fight the tobacco epidemic, and what people around the world can do to claim their right to health and healthy living and to protect future generations.

“As we continue to do public sensitization and advocate for smokers to commit to quit smoking, we ask you the smokers to avoid the use of tobacco and tobacco products,” Dr. McIntyre stated. “Let us all affirm our commitment to support and encourage those who need to quit.”

He called for measures to reduce exposure to secondhand smoke and urged people to make healthier choices.

According to the health minister, research has shown that globally, tobacco smoking causes over 8 million deaths each year and it is a leading risk factor for chronic non-communicable diseases and that evidence also shows that smokers were more likely to develop severe disease with Covid-19 as compared to non smokers.

Dr. McIntyre noted that smoking can cause damage to different parts of the body including the heart, lungs, kidneys, eyes, teeth and brain.

“The consequences of heart failure, cancers, high blood pressure, diabetes, kidney disease, all of which are the leading cause of death and illness in Dominica can be reduced, if you quit smoking,” he said. “The ministry therefore is encouraging smokers to commit to quit.”

Among the many reasons to quit smoking, the doctor said, is the possibility of reducing one’s chances of getting the many debilitating diseases that can be caused by the practice.

“When you quit you are also eliminating the risk of non-smokers who are exposed to secondhand smoke from developing lung cancer and other related diseases,” he added.

He mentioned also that previous surveys conducted show that 1 in 10 adults in Dominica is addicted to tobacco and 1 in  4 of our children has already been exposed to tobacco smoking.

“It has been recognized as well that children of smokers suffer reduced lung function which can continue to affect them in adulthood,” Dr. McIntyre explained.

He said his ministry pledges its commitment, “to support you on your journey to quit.”

The health minister also disclosed that since signing onto the Framework Convention on Tobacco Control (FCTC) the Ministry of Health has championed the cause for increased legislation for tobacco control and promotion of good health.

“Measures implemented thus far include increase in taxation on tobacco products, sensitization of the public on the ills of tobacco use and secondhand smoke, development of educational materials to include; Say no to Tobacco booklet, developed for primary school children and reduction in smoking in public places,” he stated.

Activities for ‘World No Tobacco Day’ undertaken by the Ministry through the Health Promotion Unit included the training of  key stakeholders in the Tobacco Cessation Programme, development of a Commit to Quit pledge handbook to empower smokers to quit and educational sessions at secondary and tertiary institutions and other private and public sectors.

The Member States of the WHO created ‘World No Tobacco Day’ in 1987 to draw global attention to the tobacco epidemic and the preventable death and disease it causes.