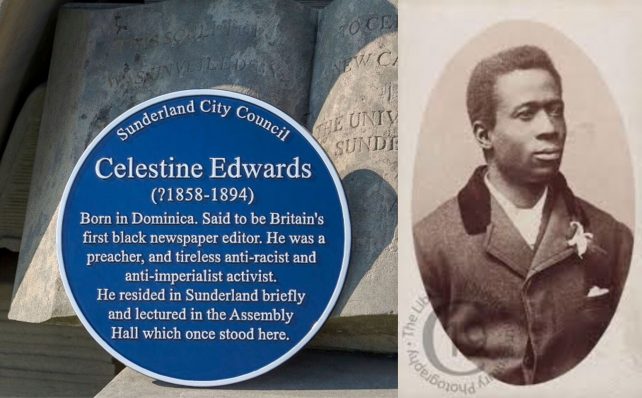 A blue plaque has been unveiled in the city of Sunderland, England, to honour Dominican Celestine Edwards who has been described as a passionate activist who fought against slavery and racism.

That’s according to an article published on Chronicle Live, one of England’s top 5 biggest regional news sites.

Edwards, who born in Dominica on 28th December, 1858, is said to be the first black newspaper editor in Britain, publishing the Christian Evidence paper ‘Lux’ in 1892, and the anti-racist ‘Fraternity’ monthly magazine in 1893.

According to the article, he used his role and public speeches across the UK to advocate for the equality of black lives, often taking place at the former Assembly Hall on Fawcett Street, Sunderland.

On October 15, 2020, Edwards’ plaque, which is the first to celebrate a Black person in the city, was unveiled in a virtual ceremony and will be installed later, on an old building, where the Assembly Hall once stood, after renovation works to the building are completed.

Speaking at the event, Professor Donna Chambers of the University of Sunderland’s Race, Class and Ethnicity (RaCE) network, said: “The feeling is one of pride that this plaque will be in Sunderland as a permanent marker – it’s fantastic.

“It’s a continuation of the anti-racism and equality work that we have been doing, but it’s one significant moment. I feel proud that we have been able to bring Celestine Edwards’ out of the silencing and given him a voice.”