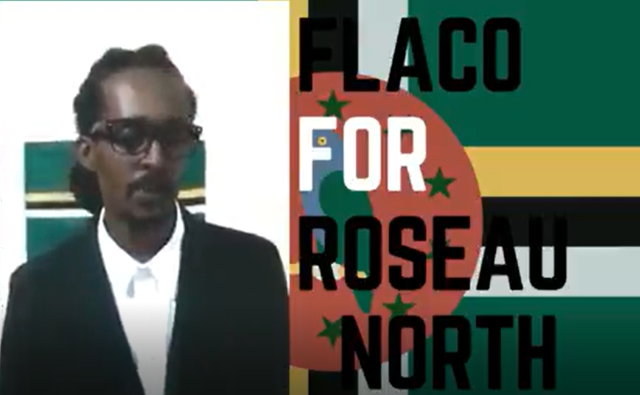 Network administrator, Tyrone Fred Nicholas, has thrown himself into the political arena and will be contesting the December 6 general election in the Roseau North Constituency as an independent candidate.

In a video message, to drum up support among constituents, he said he is doing it out of a sense of duty.

“Presently due to the contentious situation with which we have found ourselves and with a solemn conscience and a sense of duty to my community, I offer myself as an option today,” he stated.

With the polls mere weeks away, Nicholas, who described himself as an activist with the Moune Sewye Organization, said he will use the time to demonstrate the type of leadership that is expected from him and others who are in public service.

“Not just from the prime minister but from each and every individual who has presented and dedicated themselves to public service,” he remarked.

He said he was led to contest the election when he reflected on, “if you want something done right, roll up your sleeves and do it yourself.”

“We have accepted mandate after mandate from representatives who have failed to deliver,” he said. “Among these promises is a promise for electoral reform, a promise which has devolved into an almost    contemptuous issue but with your help I intend to prove, firstly, not just to us, but to our children that we have the power and the choice to demand better for ourselves and to change the direction of our lives and that if we resign ourselves to hanging our hats on promises that are never fulfilled, we are basically saying that we are giving up on our own abilities.”

He added, “So I have risen this time to ensure that absolutely no empty promises will be given to my fellow constituents.”

The hopeful candidate gave another reason why he is contesting the election.

He sought to depict Roseau North as a real place with real people.

“My fellow constituents we are not figments of imagination,” Nicholas said. “We are not ideas in a man’s head. We are real people with hopes and dreams and needs to fulfill and I believe it is time that we are treated as real people because Dominica, more importantly to me Roseau North, is a real place.”

Going forward, he stated that his team will be visiting various communities in the constituency to meet with everyone, regardless of political party or persuasion.

“Now is the time for unity,” Nicholas stressed. “While others seek to divide us for their benefit, I seek to unite us for ours.”

In the upcoming poll, Nicholas will go up against Miriam Blanchard of the Dominica Labour Party (DLP) and Sherman Hartford Boston, another independent candidate.

During the last general election in 2019, Roseau North Constituency was won by Danny Lugay of the United Workers Party (UWP) with 2,134 votes.

He defeated Joseph Isaac, who previously held the Roseau Central seat for the UWP before crossing the floor to become a DLP Minister.