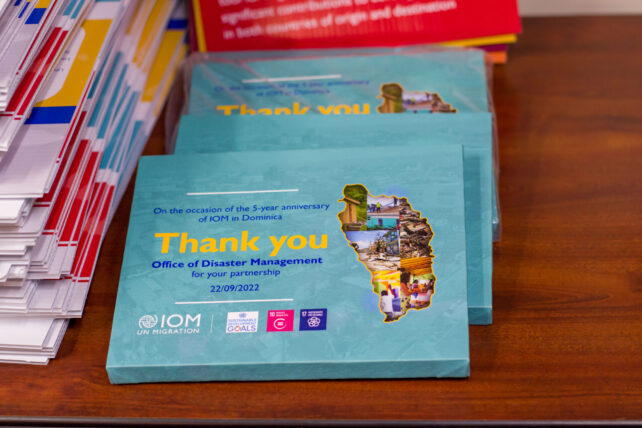 On Thursday 22 September 2022, the International Organization for Migration (IOM) commemorated five years of operation in Dominica. IOM was one of the first United Nations agencies to arrive in Dominica to support early recovery efforts, just five days after Hurricane Maria had wreaked havoc on the island.

Head of Office of IOM Dominica, Natasha Greaves recounted the five years of operations in Dominica and noted that the successes in IOM Dominica’s journey from emergency response to development support, could have been possible without partnerships.

She expressed sincere gratitude firstly to the Government of Dominica, including all the ministries, units, divisions and departments IOM has worked with, the donors, and other partners in private sector, civil society, churches, and others who have contributed along the way to the humanitarian and/or development work of IOM. Ms. Greaves used the
opportunity to express special thanks to the Office of Disaster Management and the NEPO Emergency Shelter sub-committee who were present at a news conference held to hand over 155 multilingual signs for emergency shelters in Dominica, presenting them with tokens to recognize their invaluable partnerships. In the coming weeks, several other major government stakeholders will be recognized.

The Head of Office noted that she could not close without thanking the IOM Dominica team, past and present over the five years, without whom nothing could have happened.

“The success over the last five years is because of the team at the International Organization for Migration, I can stand here and tell you over the five years of existence that we have had, we have engaged more than 150 persons in our employment. As of today, we are a group of seven or eight, but we stand on the heels of many other persons that went before us. And it is truly an absolute privilege to lead this amazing group of persons.”

IOM Dominica continues to actively demonstrate its commitment as a development partner in Dominica. This week the organization launched a campaign supporting the Ministry of Planning to show how migrants contribute to Dominica’s development. The organization is also working in the OECS region under a project funded by the UN Trust Fund for Human Security and met this week with stakeholders in 11 OECS Member States to discuss the region’s achievements and gaps in addressing the complex challenges of environmental migration to ensure that affected people can be free from fear, free from want and free to live in dignity.

IOM will continue to offer its support to the Government and people of Dominica and the Eastern Caribbean as the region continues its path toward sustainable development.

For more information on IOM or its work please contact IOM Dominica’s Communications Assistant at 767 275 3225 or email malleyne@iom.int/iomdominica@iom.int