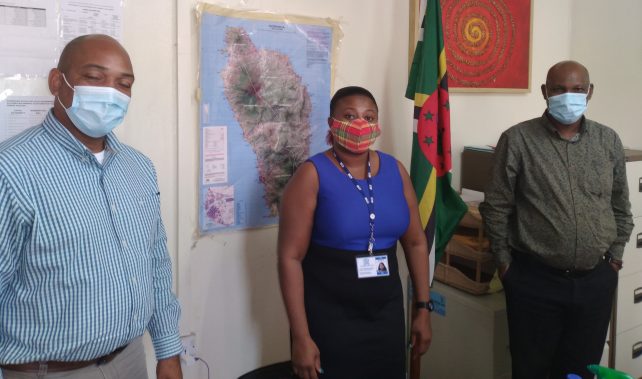 Three years after the widespread damage caused by Hurricane Maria, the disaster management system will receive a second boost of support from the UN Migration Agency and the USAID to improve the preparedness of communities to deal with emergencies and build resilience at the community level.

The National Emergency Planning Organization (NEPO) Emergency Shelter subcommittee, Office of Disaster Management (ODM) and the International Organization for Migration (IOM) in Dominica have launched a 12-month, US$800,000 project funded by United States Agency for International Development (USAID), to support the Government of Dominica with increasing the emergency preparedness.

Natasha Greaves, Head of Office of the International Organization for Migration (IOM) in Dominica, explains:

“Three years post Hurricane Maria, IOM through funding from USAID, continues to support the Government of Dominica on the road to resilience.   While national guidelines and protocols are in place to reduce the harmful effects of disasters and to minimize the human and economic losses, appropriate systems, infrastructure, and equipment need to be in place for these plans to be effective.   This project will repair seven hurricane shelters,   provide security and essential equipment to 55 emergency shelters around the island, share information to ensure that community members in these communities are more prepared for these emergency scenarios, and to support training of first responders to assist with disaster management. The project is a follow up to a previous 2018-2019 IOM-USAID partnership in support of the work of the Office of Disaster Management, and by extension the Government of Dominica.”

According to National Disaster Coordinator, Mr. Fitzroy Pascal, this project comes at a very opportune time.

“The Office of Disaster Management welcomes this collaborative project with IOM, which will focus on improving resilience by strengthening disaster preparedness in Dominica.   This project is in line with the plans and goals of the ODM over the next five year period, which includes activities to strengthen national mitigation, preparedness and response systems through an enhanced early warning system and to improve national community-based disaster management programmes to reduce vulnerabilities to priority hazards,” Pascal said. “The support from the IOM at this time is very timely, as we collectively work towards building national resilience to hazards that we must learn to live with.”

The seven emergency shelters for repair and rehabilitation were recommended by the Emergency Shelter subcommittee of the National Emergency Planning Organization (NEPO) through its Chairperson, Local Government Commissioner Mr. Glenroy Toussaint.  Mr. Toussaint explains the process.

“The shelters for renovation or improvement were really selected based on the vulnerabilities of these communities, the usage – number of people who would be required to use the facility during adverse weather events, and importantly the capacity of the community, that is, the organizational structure that exists within those seven,” he stated.

The emergency shelters identified for repair under the project are the Eggleston Pavillion, Pointe Michel Community Centre, Laudat Old School, Cochrane Old School, Cottage Community Centre, Lower Penville Resource Centre and Sineku Resource Centre.  IOM is currently re-assessing these shelters and plans to begin repairs in November 2020.  The works will run concurrently under the management of different contractors, in order to be completed by the end of the project in June 2021.   All shelter managers were notified during preliminary assessments in 2019, and since project activation, that their shelters must be vacant and available for the works to begin.

Under the project, IOM with funding from USAID will also be pre-positioning essential emergency shelter equipment supplies in a total of 55 emergency shelters, including the seven that are being repaired.

“The 55 shelters that have been earmarked for provision of non-food-items were also selected based on the vulnerability of those communities as well.   We have a number of communities that are in vulnerable areas and we will seek to strengthen those facilities so as to ensure that persons are in a more comfortable and safe environment during adverse events such as hurricanes, tropical storms and the like,” Toussaint said.

He welcomed the contribution to the initiatives.

“So it is really a project that is welcomed.  It is going to take us a long way in terms of our own community emergency readiness initiatives as far as building capacity of communities to respond to adverse events”.

Community members are being urged to play their part in community preparedness, including protection of basic supplies such as wheelchairs, cots and First Aid kits at the shelters, and coming forward as volunteers to assist the Emergency Shelter Managers as part of a management Team for each shelter, within the structure of the Community Disaster Management Committees.  People who are willing to volunteer in community disaster preparedness, including those from vulnerable groups such as youth, elderly, migrants and people with disabilities are asked to contact their local village councils or the Office of Disaster Management (ODM) to make themselves available to serve.

Head of Office of IOM Dominica explains that the UN Migration Agency draws on its global experience in Camp Coordination and Camp Management (CCCM) to make a positive impact in disaster preparedness.

“IOM is the leading organization in the CCCM sector worldwide, acknowledging that disasters often have a mobility element – where people are forced to leave their homes.   IOM’s mission is to ensure that these movements are regular and well managed, for the benefit of all involved”.

All activities will be undertaken by IOM in close collaboration with the ODM, the Emergency Shelter subcommittee of NEPO, Local Government, community level disaster committees, and other key stakeholders.

Ultimately, through this project, IOM hopes to support the government and people of Dominica, to be better prepared to face events such as floods, landslides, fires, hurricanes, as well as earthquakes, volcanos, and other natural hazards.  The USAID-funded project runs until the end of June 2019.