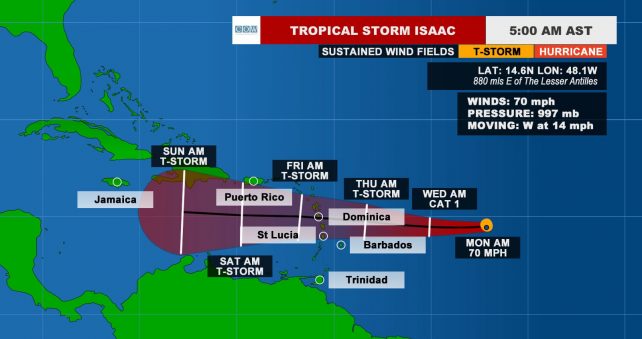 Hurricane Isaac was downgraded to a tropical storm at 11:00 pm last night.

The Dominica Meteorological Service announced in its 6:00 am advisory today that at 5 am, Tropical Storm Isaac was located near latitude 14.6 degrees north and longitude 48.1 degrees or about 880 miles east of the Lesser Antilles. The storm continues to move westward at 14 mph with maximum sustained winds down to 70 mph with higher gusts.

According to the advisory, little change in strength is forecast during the next few days and Isaac is expected to pass over or near to Dominica as a strong Tropical Storm, late Thursday into Friday.

By tomorrow, Wednesday, increased cloudiness and shower and thunderstorm activity are anticipated, as a rain band from Isaac affects the Lesser Antilles.

The Met office says a tropical storm watch or warning may be issued for Dominica later today and advises residents  to closely monitor the progress of Isaac and to make all the necessary preparations for the arrival of this system. .

Moderate seas are expected during the next 24 hours with waves peaking up to 5.0ft.

Acccording to the weather outlook, weak instability is expected to affect the area during the today. Coupled with light winds and daytime heating, some cloudiness and localized afternoon showers are possible.