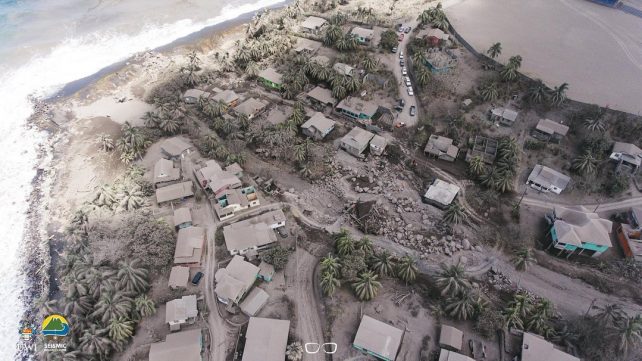 Pledges of assistance continue to flow in for St. Vincent and the Grenadines as the island struggles with the effects of an erupting La Soufriere volcano which began on April 9, 2021.

into the weekend and cautioned residents to remain alert for the rain-soaked ash and poor visibility.

A lahar is a rapidly flowing dense mixture of rock debris, ash and water. They have the consistency of wet concrete as they flow and can happen during and after eruptions. These can be dangerous to people in the red and orange zones and as a result, police on the island are restricting travel to these areas.

In a recent update, the seismic research center also advised that the volcano continues to erupt and explosions with accompanying ashfall, of similar or larger magnitude, could restart with little or no warning. Earthquakes are also continuously occurring.

This week the St. Vincent Electricity Services Limited (VINLEC) told customers that the initial explosive eruption at the La Soufriere Volcano had impacted the company’s meter reading and billing processes. Residents were advised that some April bills would reflect an increased number of billing days while other customers may receive estimated charges for the month. The company also announced that it was suspending bills for customers in certain areas.

Meanwhile, St. Vincent recorded six new COVID-19 cases out of 78 samples processed on April 26. There were five new cases confirmed the day before. One more COVID death was recorded, bringing the total to 11 and total confirmed cases to 1850. There have been 1711 recoveries.

“Now, I can’t see the reason that you don’t want to be tested. It is important for your health, for persons who are interacting with you, and for persons who are with you in the shelters, or those who are crowded in homes, particularly in those homes where individuals are now — you have more persons in the family house than usual because people have generously taken in family, friends, and even strangers. So, please test,” Gonsalves said.

A lady, who was later confirmed to be negative for COVID-19, collapsed and died at one of the island’s shelters last week.

St. Vincent authorities are coordinating aid with help from regional and international organizations such as the Caribbean Disaster Emergency Management Agency (CDEMA), the Organization of Eastern Caribbean States (OECS), the World Food Program and the Pan-American Health Organization (PAHO).

With agricultural crops and livestock destroyed and local water supplies contaminated, electricity, water, sanitary supplies, food and expert assistance for clean-up after the eruptions are among the needs of the nation.

Some of the latest support for St Vincent has come from countries such as Norway which donated US$ 150,000 in humanitarian aid through the United Nations and Red Cross system.

Canada has also provided CAD$440,000 towards the basic needs of displaced residents, adding to its $250,000 in aid to the World Food Program (WFP) following the UN Flash Appeal for assistance to St. Vincent.

Meanwhile, bringing its total aid to over US$1 million, the UK recently presented the island with US$695,000 through the WFP. These funds will support the delivery of urgent cash and voucher assistance to displaced families for nutrition, hygiene and other basic needs. An estimated 13,000 people will benefit from this support for three months.

Before the eruption, the UK had already provided US$70,000 for aerial helicopter surveillance and equipment installations to help study changes in the volcano in order to strengthen early warning systems for timely evacuations.

For long term recovery, the UK has an ongoing program of developmental assistance for over US$55.5 million. This is aimed at boosting various sectors including healthcare, sustainable energy and youth development skills.

TPS is permission for foreign nationals to live in the United States temporarily because of armed conflict or natural disaster in their home nation, the report states.

There was also a request to the New York governor for air support to fly relief supplies to St Vincent.

Additional assistance has come from the UNDP Barbados and the Eastern Caribbean organization which provided USD $300,000 in funding towards the UNDP Crisis Response and Recovery Program for St. Vincent.

The two-pillar project will involve household and building damage assessments, cleaning volcanic ash and debris, supporting economic reactivation and emergency employment to over 2,000 households directly impacted by the eruption.