The rapidly approaching date of the next general election notwithstanding, the Concerned Citizens Movement (CCM) is continuing its fight for electoral reform.

But the group’s latest effort has met with a level of resistance and hostility from the police that many believe is uncalled for.

A small group of just a dozen protesters who staged a peaceful protest outside the President’s Palace on Monday were confronted by armed police and some hostility. 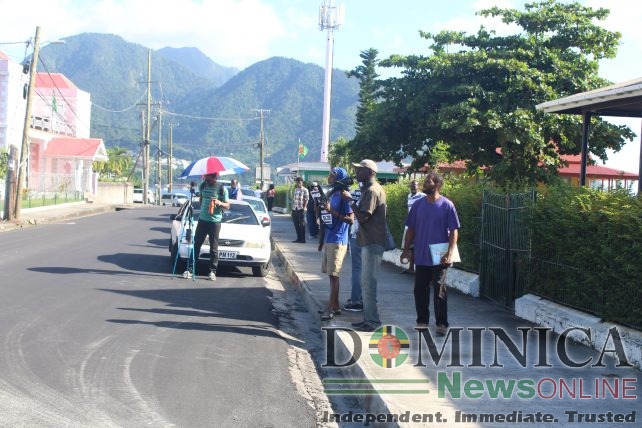 Attorney at law, Henry Shillingford, who briefly joined the group, was physically assaulted by a senior police officer.
CCM member, Earl Bruno, who witnessed the incident, told Dominica News Online during an interview, that Shillingford came to assist them after they were asked to leave their initial location.

“The police wanted us to move…in front of the gate of the president compound so we then moved to the other side of the road and we stood there on the sidewalk,” he said. “We stood there for a couple hours. They came back to us and said to us we must now move. We told them no…so we called in a team of lawyers and they spoke to us and told us we are within our rights.”

He said it was then that Shillingford came to assist and spoke on the protesters’ behalf by quoting laws which gave them the right and freedom to speak.

Bruno said Shillingford was then harassed and abused by one of the police officers present.

Bruno expressed his disappointment stating, “it was not called for because we were peaceful and we were respecting the office of the president.”

He said the CCM has written several letters and made calls to the President and has not received any form of response.

However, Bruno insisted that the group is making it its duty to get the attention of the president of Dominica to ensure that the necessary electoral changes are made before election day. He said in that regard, the CCM will be holding several meetings throughout the upcoming weeks.

The United Workers Party (UWP) which has also been a fierce advocate for electoral reform to ensure free and fair elections, has decided that it will contest the upcoming general election without electoral reform to prevent an uncontested victory and a resultant dictatorship for Roosevelt Skerrit.