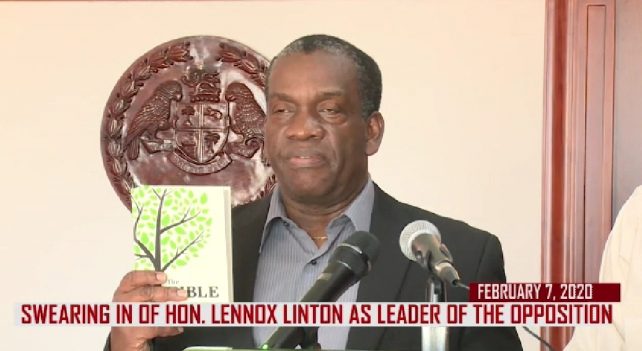 Parliamentary Representative of the Marigot Constituency, Lennox Linton is the official opposition leader.

Linton took the oath before the President His Excellency Charles Savarin at a ceremony held at the State House on Friday.

Linton “solemnly” swore that he will “faithfully” execute the office of the Leader of the Opposition without fear or favour, affection or ill will and that in the execution of the function of that office he will “honour, uphold and preserve” the Constitution of the Commonwealth of Dominica”.

Linton was elected political leader of the United Workers Party (UWP) on Sunday September 01, 2013 at the delegates conference which was held at Castle Bruce.

His party was defeated in the 2019 general elections held on December 6, losing to the Dominica Labour Party (DLP) 18-3.

Linton along with 3 elected and 4 nominated members will make their first appearance in parliament after the 2019 elections on Monday 10th February.