Physician at the Dominica China Friendship Hospital (DCFH), Dr. Cleona Peters, has revealed that a significant number of people who test positive for HIV on island are reluctant to enroll in care, mainly due to stigma and discrimination and is therefore calling on the public to be more empathetic.

Dr. Peters who is stationed at the infectious disease clinic at DCFH, spoke to Dominica News Online (DNO) on the occasion of World Aids Day at the DCFH where an awareness campaign was held by the National HIV/AIDS Response Programme.

Dr. Peters who is stationed at the infectious disease clinic, highlighted the need for more public education on providing support not only to HIV patients but their families.

“Persons are afraid of others seeing them going to certain clinics, going to see certain doctors. Even their family members are afraid of the stigma that’s attached to their loved ones being positive. And I think once we take a hand on that stigma and discrimination once we control it, once we, as a general population, as a community, are more empathetic towards someone who is HIV positive,  I think it will be easier for that person to get into care,” Dr. peters stated.

According to the health practitioner, once one finds out that they are positive, it is important that they get linked into care immediately, which involves the Antiretroviral (ARV) therapy which decreases the viral load or the amount of the virus in the body.

She stressed that when the viral load in the body becomes undetectable, it also becomes intransmissible.

“It’s very, very, very important. I mean, today, we have no reason why a patient with HIV should die from the virus because we have care; we have treatment which has been reduced to one pill a day,” Dr. Peters said. “HIV is a contagious disease; COVID is a contagious disease. You can easily get COVID; it’s more virulent than HIV, but yet still there’s not that level of stigma and discrimination attached to COVID as HIV, and that really needs to change.”

Acting Coordinator, National HIV/AIDS Response Programme in Dominica, Lester Guye, echoed Dr. Peters’ concerns and pointed out that only 70-75 per cent of the people who test positive enroll into care.

“That is good but it can be better,” he said. “It means that the other 25 -30 per cent normally ends up at the hospital at some point and it’s because at that time, they will be presenting with AIDS-defining illnesses, which are a lot and cost us a lot more to treat and is a lot more challenging for clients because we have to do radical treatment to get them back to being virally suppressed?”

Guye stated that throughout the years, the programme has made numerous strides locally such as being validated for elimination of mother and child transmission of HIV and congenital syphilis, the availability of medication with the concept of test and treat -meaning that as soon as you’re tested for HIV, and you decide that you want to start taking the medications, it’s available, as well as getting several patients on island to a state of being undetected, or virally suppressed.

He said the unit continues to provide psychological and social support for people who are HIV positive and has increased the pace at which results are delivered to those who come in to get tested.

There have been no detected positive cases for the year thus far, but Guye says that this may because of  COVID-19, as the pandemic has curtailed the volume of testing which is typically done.

Although their usual month of activities has again been downscaled, the HIV/AIDS Programme still intends on raising awareness by posting on their social media pages and giving out information as well as commodities at their office.

According to Dr. McIntyre, the goal of eliminating HIV and AIDS by 2030 is dependent not solely on our health systems but also on the citizens.

“You have a responsibility to treat others in a way that empowers them, a responsibility to get involved, and your involvement and attitude will impact the process of healthcare; impact us as we look to adopt a more Community-centered model of Care,” the Minister stated. “Great emphasis is being placed on ending stigma and discrimination and upscaling advocacy thus eradicating the inequalities that persist as it relates to health care, for clients and patients who are infected with HIV and AIDS.”

He said the government of Dominica’s will continue to  lend the necessary support to make their quality of life as fulfilling as possible and called on organizations, individuals, businesses and institutions to join the  fight to stamp out the inequalities that exist against these victims  “so that they can continue to enjoy a good quality of life.” 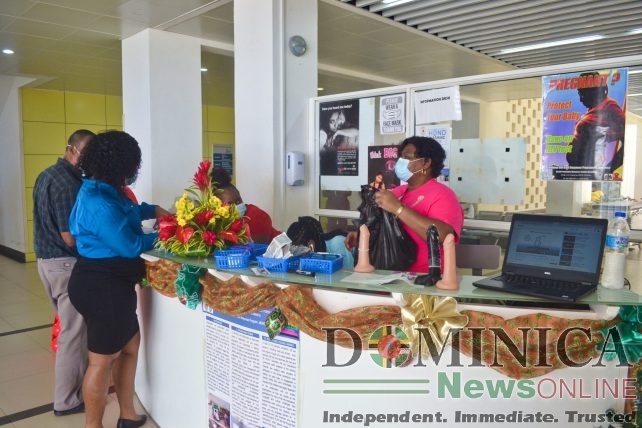