The Dominica Council on Ageing (DCOA) has organized a number of “exciting” activities to create further awareness on the issues affecting senior citizens as the council celebrates the Month of The Elderly beginning today, September 1st to October 1st, 2020.

President of the Dominica Council on Aging (DCOA), Ophelia Olivaccé, Marie told Dominica News Online (DNO) during an interview on Monday that due to the threat of COVID-19, the Council is unable to host any large gatherings this year.

“Everyone knows what the pandemic is and we also know that our seniors, like everybody in Dominica, have survived up to now and we pray to God that they will continue to survive the pandemic,” she said. “On account of the very protocols, we cannot have those large gatherings like we would like… therefore, we have decided to use the Month of the Elderly to create further awareness with regard to the issues that affect senior citizens.”

Marie said information sharing will be done as the Council plans to work with the media to disseminate information and to an extent, some education.

She highlighted two important speeches which include an address on September 1st by Minister responsible for Senior Security and Dominicans with Disabilities, Dr. Adis King and on October 1st, during the observance of International Day of Older Persons, a speech by His Excellency, President Charles Savarin.

She said another activity will be the celebration, nationwide, of Grand Parents Day 1 on the 13th of September and a special service is also expected to be held.

“We are encouraging churches, community groups or anyone who would like to contribute something to a senior citizen, just to say I appreciate you; that for me is a lot” she stated. “Or if they have an errand to run, you go and ask if they want you to assist them.”

On  September 16th, there will be a special Health Discussion with Dr. Dorian Shillingford from 5:00pm to be live streamed by Dominica News Online (DNO).

According to the DCOA president, from September 21st to 28th, there will be a photographic competition which will be displayed on the DCOA Facebook page

“That is directly geared towards having young persons take pictures of older persons in various activities so that they can share them on our web page,” she explained. “It will also give us an opportunity to see what they see seniors doing”

She said there are attractive prizes to be won.

Meanwhile, Marie says she considers the Council and its members as “seniors on the move”.

“Because our seniors, even if they have to stay home on the account of the fact that they are vulnerable, they are on the move,” she stated. “They do things within the scope of their home environment.”

She continued, “School children have been in the house for so long, people ought not to forget that the seniors in the house, also recognize that they are on the alert. Those who can take care of the children do take care and the others they absorb their noise. Sometimes, they tell them stories; sometimes they learn about social media from the children, so they remain alert.”

Marie encouraged everyone to be nice to the elderly, “they need people just as we need people or maybe more…because many of them live alone.”

“We owe a debt to the senior citizens,” Marie stated. “When we were children everyone in the village took care of us and therefore, we have to be cognizant of that fact and show that appreciation.”

The DCOA Month of the Elderly Programme can be viewed below. 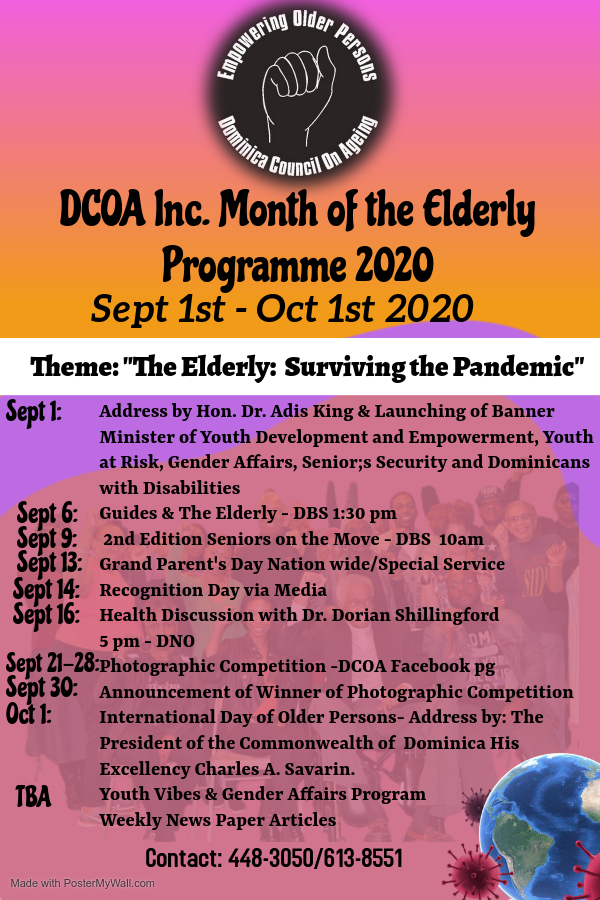