With over 1.9 billion followers, Islam is the second most practiced religion in the world, after Christianity. However, Muslims (followers of Islam) are still a religious minority in Dominica, but the numbers are growing.

With about 300-500 members now, the movement has seen the construction of two mosques –  one in Picard and the other in Goodwill – adding to its initial place of worship, a temporary structure in the Kalinago territory.

Islam is a monotheistic religion which teaches that Muhammad was the final prophet of God or Allah as He is known in Arabic. Followers of Islam are called Muslims. The word Islam means submission to the will of God. It teaches that Allah’s word was revealed to the Prophet Mohammed through the angel Gabriel. Islam respects some of the same prophets as Jews and Christians, including Abraham, Moses, Noah and Jesus.

Recently, Dominica News Online (DNO) had a brief sit-down with Nigerian-born leader of the Muslim community in Dominica (referred to as an Imam), Idris Ahiwa. He touched on the religion’s progress, a few core beliefs and some common misconceptions about the Islam in Dominica.

Muslims first came to Dominica and the Caribbean during the colonization years as slaves from West Africa.  They were not allowed to practice their religion and were forced to learn the language of their colonizers and later killed off. Another wave of Muslims eventually migrated as indentured labourers from Asia but the most successful group emerged in the 1970’s through the Black Power movement after Malcom X became a Muslim.  This resulted in some locals, Rastafarians included, converting to Islam, Ahiwa explained. The faith grew even stronger years later when some Dominicans studying abroad, got converted and began practicing the faith when they returned home.

As to its followers, the Imam said that there has been both internal and external growth, with 90 percent of the Muslim population in Dominica being born here. Moreover, according to him, about 120 Muslims who were students at the Portsmouth-based Ross University left the island after the school relocated to Barbados in 2018. The medical students had been a primary reason for the erection of the mosque in Picard.

Notwithstanding this, followers have also increased as a result of the Dominica Citizenship by Investment Program in which a number of Muslims who purchased Dominican citizenship have reached out and visited local mosques, the leader said.

Despite the growth however, Ahiwa said that Muslims still face some level of negative perception from the public.

Due to terrorist attacks from Islamic extremists around the world over the last few decades, Ahiwa said the religion has been somewhat generalized as one which is violent and intolerant of other religions.  Though the Muslim community here and internationally have condemned and distanced themselves from these radical attacks, the stereotype still exists.

Ahiwa believes that people with this distorted view of the religion are those who tend to have limited knowledge about Islam. He is adamant that 99.9 percent of Muslims “have nothing to do with terrorism.”

“Muslims are being viewed as terrorists and it seems the burden of proof is on you to declare and prove that you are innocent. So every Muslim is deemed to be a terrorist until you prove otherwise,” he lamented, admitting that local followers are occasionally called names like ‘taliban’ or ‘ISIS.’

“Islam does not teach you to hate a Christian, let alone to kill a Christian,” he stated while categorizing the religion as one of the most tolerant in the world. He said that based on the Quran – the Islam bible – Muslims are allowed to marry Christian and Jewish women, an act that is sometimes discouraged by Christians and Jews.

The leader attributes much of the stigmatization to international political groups with hidden agendas and global media.

“In America, terrorism is exclusively for the Muslims [while] criminal behavior in America is for blacks – ‘thugs’. When it’s white people, even with the insurrection, people do not want to call it domestic terrorism. A white man can go take up his gun, kill people, [and] people don’t call it terrorism. But if it is a Muslim, the first thing that comes to mind is terrorism even though they have similar motives,” he said.

Nevertheless, the religion is forging ahead and boasts of being “very active” and well represented in different sections of society, with doctors, lawyers, lecturers, a national epidemiologist and major businesses in Dominica such as Beauty Wise and Mega Store.

“We play our role,” the Imam added while touting an Islam-centered radio program on DBS Radio every Thursday night from 7p.m. “When there are meetings we are invited by the government to be part of them,” he added.

A core belief of Islam is that of the ‘oneness of the Almighty Creator.’ Muslims do not believe that any other being shares divinity with God – no intercessor or intermediary – neither does He have a mother, father or children. This means that they do not regard Jesus Christ as the son of God. They do not worship Prophet Mohammed, which Ahiwa said is often mistakenly believed by many. They accept that there is an upcoming judgement, resurrection and angels.

Muslims engage in ritualized prayer and worship five times a day – early morning before sunrise, sometime after noon, around 4 p.m., after sunset and before they go to bed. These sessions take about 10-15 minutes and are done individually or collectively. Males are obligated to attend a collective Friday worship session at a local mosque at about 1:30 p.m. but females are not.

Before one can start worship, they must wash or cleanse themselves in a particular way which is referred to as an ablution. Also, they must learn at least two chapters of the Quran in Arabic to worship.

The concept of Sabbath is not observed.

“The less attractive you are out there the better,” Ahiwa said, adding that in Islam sex is not allowed except within marriage.

“So whatever that may or could… lead [to] or encourage [sex outside of marriage], Islam does not allow it,” he said. For that reason, shaking hands and hugging people of the opposite sex is forbidden, he added.

“In Islam, financial responsibility rests entirely on the man. No matter what [a woman] earns, and you could have a lot of money, you are not obliged to put a dime in the house. The man has to provide everything – food, shelter, and clothing. So if he can afford to have financial responsibility to marry a second wife, he is allowed,” Ahiwa explained, adding that the husband must treat both wives fairly and equally. They all have to agree to time sharing. “It’s also practical to have them (the wives) near to each other,” he noted.

“If he builds a house for one, he has to build a house for the other,” he said adding that, “if they chose not to share a house then that’s their right. You cannot put them in one house.”

Dominican law allows a man to have one wife but Ahiwa explained that a Muslim marriage is different from the traditional and legal marriage as it is popularly known.  For Islam, marriages are religious and couples do not have to legally register their unions. He said some Muslims do so strictly for legal purposes. He said that a religious marriage is done in the sight of God and that marriage is real.

“So you can have a woman who is legally married but divorced in Islam and remarried in Islam, which is acceptable,” he said adding  that a “legal” marriage “has nothing to do with the Almighty Creator.”

“If the man is married to the first wife legally, when he goes for his second wife, he doesn’t register it. So there is nothing to prove that he has broken any law… So you can’t take me to court and say I am committing bigamy. Some people will say ‘well she is a side woman.’ Call it whatever you want but Islamically, she has equal rights,” he said.

“The main purpose of sex is to multiply… if a man marries two wives or four wives [then] every two years he will have a child. If the woman marries two husbands she can only make one child and without DNA… that child belongs to which of the husbands?” he reasoned.

Another belief of Islam is that Muslims should not openly sin. While admitting that everyone sins, the leader said that flaunting it is not acceptable in Islam.

“In the Christian [community], hiding and doing [sin] is hypocrisy. In Islam, the person who hides and does something still has faith. That’s why he is hiding. He is not comfortable… One who does it in public he doesn’t care… it’s not a good thing to be public about it and to be bold faced and go around [sinning], he said.

“If somebody who is being looked up to does that in the public [one would say] ‘look the pastor and them doing that too…so why you all have to talk to me?’ So it’s not a good thing to commit sin in public and to be bold about it,” he said.

Muslims usually fast during Ramadan – a holy month of introspection and prayer. It is celebrated in April as the month during which Muhammad received the initial revelations of the Quran. They fast for 30 days – eating and drinking only between sunset and dawn. There is total abstinence from food and drink during the day.

Throughout Ramadan, “we share and worship together. It’s a wonderful feeling,” the leader said.

Ahiwa studied Islam in Sudan and travelled to Dominica in 1999 when he was asked to serve as a qualified Imam. He has been in that position ever since. 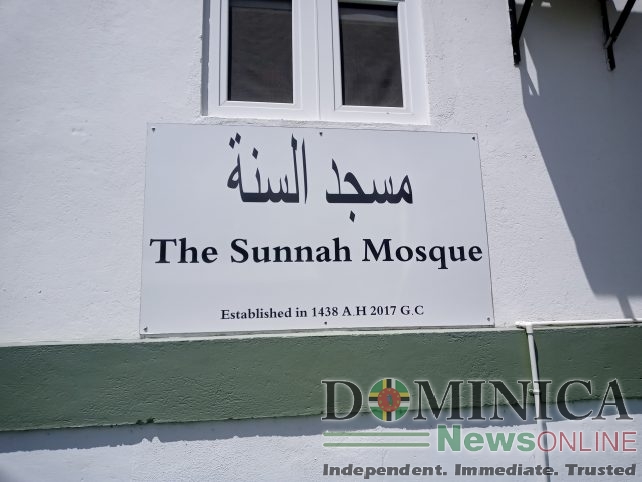 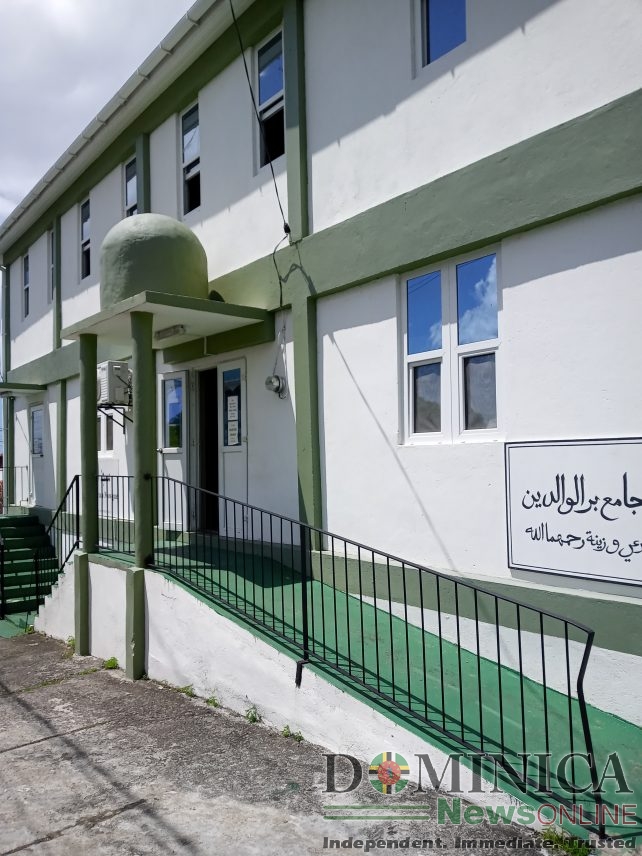 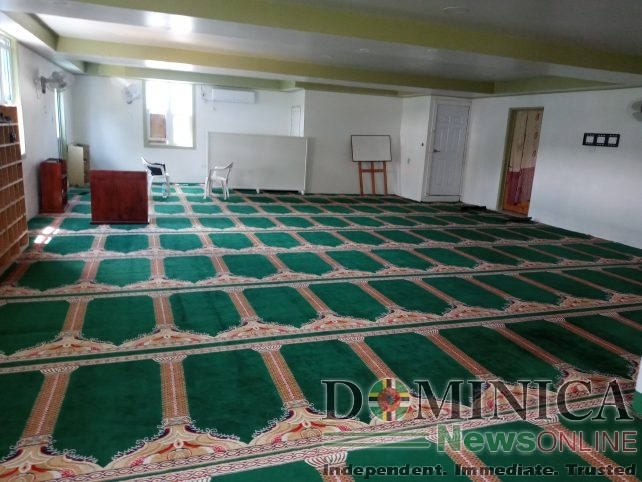