Every year, during the Christmas Season, the National Bank of Dominica Ltd (NBD) embarks on an outreach programme, which touches lives in various communities around Dominica.  This year, the Bank brought the Christmas spirit to the children and teachers of the Savanne Paille and Clifton Primary Schools, the residents of Chances in Jimmit, and three families in the north.

On Sunday, December 11th, staff of NBD visited the village of Savanne Paille to spread the joy of Christmas.  The children and teachers of the Savanne Paille and Clifton Primary Schools were thrilled with a Christmas Party and visit from Santa.  Both students and teachers were recipients of gifts from Santa.  The principals of the schools expressed their pleasure and gratitude to NBD for choosing to spread Christmas cheer in their community. Just a few months earlier, staff of NBD had visited the Savanne Paille Primary School to undertake a project under their Beyond Banking staff volunteer programme. 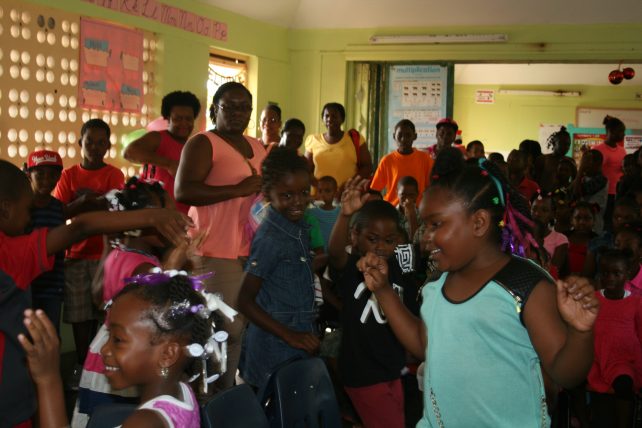 On that same day, another group of NBD’s staff visited the residents of Chances.  They prepared and served lunch; and spent time interacting with the children.  The children enjoyed the care and attention, while the Bank’s staff had a rewarding afternoon. The Bank also made a cash donation to organisation.

Also forming part of NBD’s Christmas outreach, was the presentation of hampers to families in need of assistance.  Three families in Paix Bouche, Glanvillia and Toucarie were the happy recipients of grocery hampers valued at $500 each.

Managing Director of NBD, Ellingworth Edwards, said that he was elated that NBD could touch so many lives this Christmas Season and thanked the staff for giving their time and talent.  He extends Seasons Greetings to all NBD’s Customers and the general public.