Parliamentary representative of the Roseau Central Constituency, Melissa Poponne-Skerrit has described three fully-equipped multipurpose hard courts at the Windsor Park as one of the most significant investments in sports infrastructure which the government has undertaken since the construction of the national stadium.

She made made the statement on Sunday during the commissioning at Windsor Park Sports Stadium, of the hardcourts which were built over the last few months.

The courts will facilitate the games of netball, basketball, volleyball and tennis and will also be used for other cultural and entertainment events.

Poponne-Skerrit said that in spite of all the challenges that Dominica faces, the government has invested heavily in the country’s sports sector and continues to show its commitment to the youth. She said she is confident that these courts will help ignite a sporting revolution, not just within the city but throughout the whole country.

“We have big plans for sports in the city, in particular. We are actively planning for the reintroduction of tennis to the city. Many of our young people have never been exposed to playing tennis and you never know hidden talent may exist among us,” the Roseau MP stated. “The intention is to collaborate with the surrounding schools to offer free lessons. It is also my intention to include boxing and squash to this sporting facility in the very near future.”

The official opening of the first National Netball Tournament to be held after many years also took place at Sunday’s ceremony at Windsor Park stadium and Poponne-Skerrit in her remarks, assured the Dominica Netball Association that the Ministry responsible for sports would assist by providing coaching and exposure to the sport at a school, community and national level.

She said, “Today, we a rightly focusing on netball which historically has been the prime women sport in Dominica. In recent years, because of various reasons, the sport has fallen somewhat behind… but we are confident that the building of these courts, with the start of the national netball tournament and with the encouragement and support, we will see revitalization in netball in particular, and sports in general,”

Poponne-Skerrit also noted that the government has been collaborating with the basketball association, particularly the ‘3×3 Basketball’.

The 3X3 Basketball finals is carded for next weekend at the new hard court. It is a three-day event.

Prime Minister Roosevelt Skerrit said the government plans to invest in a similar infrastructure in the town of Portsmouth.

“My colleague from Portsmouth has to have something similar and we are committed to investing in something similar to have events decentralized and continue to improve our sporting opportunities,” Skerrit revealed.

He said although Dominica is currently facing hardship, especially during this pandemic period, the government continues its contribution to young persons.

“When you look at the investment we are making in many communities in the global pandemic, I am not aware of any country in the world that is now spending money on sports because for many countries, when you are faced with a financial challenge, you start cutting and sports is something that most governments will cut… and so the appreciation of these courts should be even more profound,” the prime minister remarked.

He encouraged the general public to make sufficient use of these sporting facilities, not only for sports but also as a place to exercise to remain healthy. 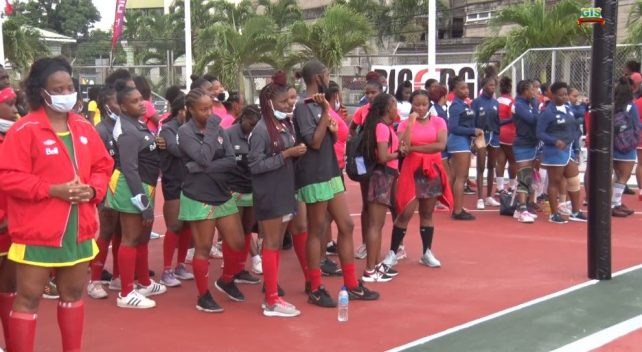