The new Housing Development in Georgetown, Portsmouth will be named after the late Rosie Douglas, a former prime minister of Dominica.

Prime Minister Roosevelt Skerrit made the announcement during a handing-over ceremony recently.

Sixty-eight families have already benefited from this new development. Twenty-four (24) received keys for their new homes, while the remaining 44 will receive their new homes in the upcoming weeks.

“We have decided to name this housing development in honour of our late Parl Rep [Parliamentary Representative] and Prime Minister Rosie Douglas,” he revealed. “This development will be known as the Rosie Douglas Housing Development.”

Prime Minister Skerrit advised residents to take care of their new homes and to avoid quarrels with neighbours.

“If you are going to name the place after Rosie who has been good to so many of us in Dominica, one, you have to maintain the place clean; two, you have to keep the flowers planted and three, no noise among neighbours,” he advised. “It’s only peace and love.” 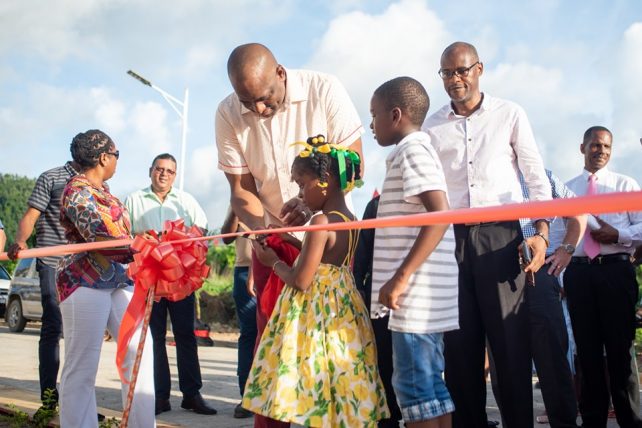 The prime minister cited the  CBI-funded project as am example of how the government has been able to utilize the Citizenship By Investment Program to directly benefit of families and residents of Dominica.

“We have had the CBI Program since 1993 and the only tangible things that you have seen the CBI has done for Dominica is under this Dominica Labour Party [DLP],” Skerrit stated. “This is the only party that can point to things – housing, infrastructure – that had been done in the country utilizing these funds, so we are grateful for this medium for raising funds.”

According to him, had it not been for this CBI funds, “and not only the CBI funds in itself”, but the prudent management of the funds, “we would have been in great difficulties after this Hurricane Maria.”