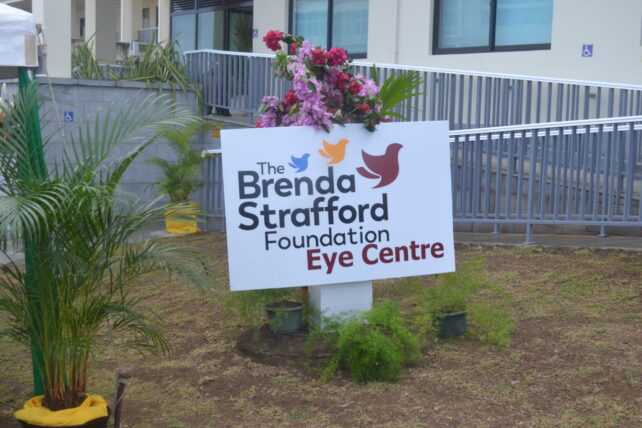 The newly opened Brenda Strafford Foundation Eye Centre, at the Dominica China Friendship Hospital (DCFH) promises to be a centre of excellence, not just in Dominica, but across the region, says the head of the Ophthalmology Department, Dr. Hazel Shillingford- Ricketts.

In her remarks at the formal opening of the facility on May 12, Dr. Shillingford-Ricketts pointed out that this “vital move” for the eye patients was a culmination of a long-standing commitment reflecting the love that Dr. Barry Strafford had for his young wife Brenda Strafford who died in a motor vehicle accident in 1974.

In providing some historical context from as far back as 2000, to the commissioning of the eye centre, Dr. Shillingford-Ricketts reported that Dr. Strafford was first approached by two Dominicans in 1979 following the destruction wreaked by Hurricane David, to assist with the reconstruction of Dominica’s health facility.

This relation would bear fruit, as in the months which followed, health centres were constructed in Bagatelle followed by Trafalgar, then later in Coulibistrie and San Sauver.

In 1985, the late honourable Charles Maynard then minister of Health, on learning that the foundation operated an eye, ears nose and throat hospitality in Haiti asked Dr. Stratfford to assist Dominica in establishing an eye service.  From then, significant assistance was provided to fund the acquisition of eye equipment, which, according to Dr. Shillingford-Ricketts, catapulted Dominica ahead in the management of diabetic retinopathy.

In the year 2000, plans officially commenced for the construction of a new eye centre.  The plans for the eye clinic were designed and drawn by architects, led by Mr. Cuthbert Joseph of the Ministry of Communications with input from the staff of the eye clinic and the operating room nurses. The building plan was reviewed by ophthalmologists and technicians and seven years later, Dr. Strafford transferred the funds to Dominica as proof of his commitment to finance the construction of the eye centre.

Dr. Shillingford-Ricketts revealed that Dr. Starfford would not get to witness the formal opening of the centre as he passed way on  April 25, 2016.

The head of Dominica’s ophthalmology department revealed that when the Chinese were contracted to construct the new Dominica China Friendship Hospital, she worked with them towards the utilisation of the original plan.

“Today, you will see how Dominica has been provided with a well designed and constructed modern eye centre,” she said. “The monies [over one million EC] from the Brenda Strafford Foundation were  redirected for the purchase of  modern high tech equipment which will no doubt be added to the equipment already donated by the People’s Republic of China to improve the eye services offered.”

The new facility is equipped with a nursing station for processing patients on arrival. Additionally, there are now six examination rooms, one for use by ophthalmic technicians, three rooms for use by the ophthalmologists, the fifth for fundus photography and non-freeze visual fields, and the final is dedicated to various laser treatments.

Among the other perks of the eye centre are a fully equipped staff kitchenette, an administrative office for the head of the department and a ramp for the physically challenged, to name a few.

“The eye centre has its own operating suite with potential for eye surgery to be performed six days a week instead of once a week,” Dr. Shillingfor-Ricketts made known.

She continued, “This also allows for visiting surgeons to perform eye surgery without having to disrupt the schedules of the other surgeons. Eye Care can also be provided to patients from other countries. There are now three ophthalmologists in the public sector instead of one.”

It was also revealed that the department of anaesthesia is expected to start three pre-up clinics at the Brenda Strafford foundation eye centre for patients booked to have eye surgery as well as to provide monitored and aesthetic care during surgery.

There will also be an eye clinic 5 days a week and one district eye clinic per week at the new the eye centre.

Plans are also in place to introduce a  low vision clinic and a clinic for rehabilitation for blind people for independent living.

“I can proudly say that despite the difficulties and frustration at times, Dominica has made tremendous strides in eye care from the time of the establishment of the Department of Ophthalmology, funded by the Brenda Strafford Foundation back in 1985 to the formal commissioning of this facility today. Going forward, expect the Brenda Strafford Foundation Eye Centre to be a centre of excellence in eye care,” Dr. Shillingford-Ricketts declared.

Meantime, Executive Director of the Brenda Strafford Foundation, Mike Conroy, attributed the existence of “this world-class state of the art eye centre,” despite the many “unpredictable and formidable challenges”, to the resilience, perseverance, and commitment of the various partners involved in the venture.

He said the facility also brings new possibilities and opportunities.

“We hope that this eye centre will act as an important and impactful hub for research, clinical education and practice innovation in partnership with other Caribbean countries in order to leverage the substantial expertise in technology for the benefit of the patients throughout the Caribbean,” Conroy stated.

He pledged the Foundation’s support in providing Dominica with the assistance needed to meet that objective.