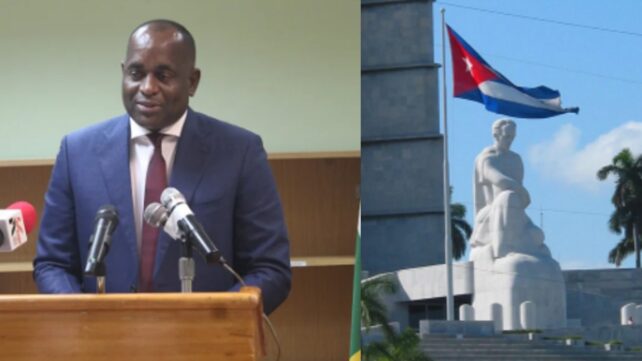 Prime Minister Roosevelt Skerrit joined a distinguished list of world leaders when he was awarded the José Martí Award by the Government of the Republic of Cuba on Tuesday evening, according to a release from the Office of the Prime Minister.

José Martí was a renowned national hero of the Republic of Cuba. The Order was established in 1972 and a memorial built in 1978 with the support of former President Fidel Castro. It is the highest decoration given by the Government of Cuba to Cubans and foreign citizens; and Heads of States and Governments, who have distinguished records in the defense of human rights, special contribution to education, culture, governance and the well-being of all peoples.

The Dominica Labour Party (DLP), in a release, said it is proud of “the accomplishment of our beloved leader and Prime Minister” in receiving Cuba’s highest national recognition.

Noting that he is the first leader in the Eastern Caribbean to receive that award, the DLP goes on to describe the  award as being “very significant for the Dominica Labour Party and for the country.”

According to the release, this is another major international acknowledgement of the “extraordinary attributes and accomplishments” of Roosevelt Skerrit which follows the 2018 conferment of an honorary Doctorate from the Duquesne University in Pittsburgh, Pennsylvania, and a Doctor of Letters degree from Lovely Professional University of India.

A growing list of world leaders have been recipients of the José Martí Award, including former President of South Africa, Nelson Mandela, who was awarded in 1991 and former Venezuela President Hugo Chavez, who was awarded in 1999.
Last evening’s ceremony brought the curtains down on a three-day official visit to the Republic of Cuba by Prime Minister Roosevelt Skerrit.

Following the ceremony, the President of Cuba hosted a formal dinner in honor of Prime Minister Skerrit to include bilateral talks to further Dominica – Cuba relations on various issues to include technical support for agriculture, disaster mitigation and healthcare.