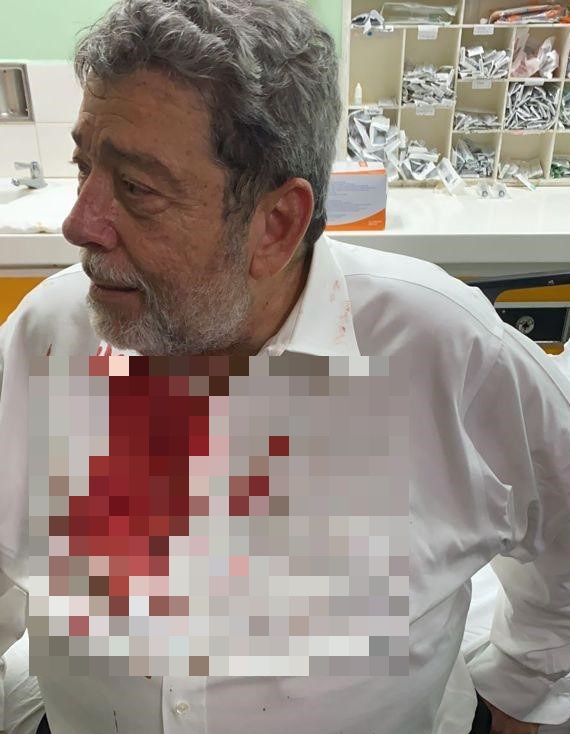 Various Caribbean leaders and authoritative bodies have spoken out against the recent violent attack on Saint Vincent and the Grenadines Prime Minister Ralph Gonsalves, who was injured by a demonstrator during a protest in his country last week.

Prime Minister Roosevelt Skerrit, one of the latest leaders to denounce the attack, said in a live radio interview aired on DBS Radio and Kairi FM on Sunday August 8, 2021, that such behavior must be condemned from all sides.

Gonsalves was struck with an object in the head while making his way back to parliament in Kingstown on Thursday August 5, 2021. Bleeding profusely, he was rushed to the hospital and then flown to Barbados that same evening for a magnetic resonance imaging (MRI) or head scan.

Fifty-six-year-old female vendor Anna May Lewis was arrested and charged with wounding in connection with the incident. She has since been bailed in the sum of $3,000.

“Clearly the person who sent this projectile intended to harm the prime minister. Every right thinking citizen of this Caribbean and this world should condemn such violence on anybody, whether it is a prime minister or an ordinary citizen,” Skerrit said.

He warned that while everyone has a right to protest, the law must be adhered to.

“We’ve always maintained that people have a right to protest but your right to protest should not be a justification for your action of disobeying the law and causing harm to an individual and everybody must condemn this action…” he also said.

Skerrit took the opportunity to lash back at politicians whom he said are “glorifying” the violent incident instead of taking a stance against it.

“I mean, are we that uncivilized? Are we that desperate to be in power… they believe that is by violence that they can get into government?” he asked.

According to Skerrit, doctors have indicated that had the projectile hit Gonsalves a bit lower on the head, he could have been dead.

Meanwhile, the Caribbean Community (CARICOM) has issued a statement further condemning the attack “in the strongest terms.”

The organization said, “This reprehensible act is an affront to our democratic principles and practices. The conduct of peaceful protest is a fundamental civil and political right that represents a healthy element of our democracy. Its degeneration into violence and physical assault must be denounced unreservedly.”

Calling for peace and calm, CARICOM wished Gonsalves a speedy recovery and said that it looks forward to the perpetrator of this “aggressive act” being brought to justice.

The Christian Council in St. Vincent also lent its voice saying it was concerned about the recent development.

It said that while democracy allows for the freedom of expression, this freedom brings with it personal and social responsibility.

The council said that such an incident indicates an intolerance of divergent views opinions and positions, and added that it abhors violence and urged those who choose to protest to do so peacefully and responsibly.

The Organization of Eastern Caribbean States (OECS) Chairman Dr. Keith Mitchel labelled the attack as heartbreaking and said it was not a true representation “of our true nature as Caribbean people, for this is not how we settle differences, political and otherwise.”

“Within the OECS, we strongly uphold the tenets of democracy and the right of citizens to protest and to have their voices heard, but to do so peacefully and in accordance with the law. The OECS Authority unequivocally condemns the use of violence of any kind and any expressions of protest, such as the burning of police barriers in the street, as was witnessed in St. Vincent on Thursday,” he said in a statement.

The OECS authority also called on the opposition forces to “unambiguously disassociate themselves from such anarchistic acts and to encourage supporters to keep their protest within the ambits of the law.”

Similar sentiments have been echoed by various other country leaders including Anguilla and Montserrat.

“As Caribbean nations we are interrelated, interconnected and mutually vulnerable to what grows when the roots of violence are allowed to spread.  We cannot afford for such to happen, if not for ourselves for the generations looking on,” Anguilla’s Prime Minister Ellis Webster said.

Montserrat’s Premier and Minister of Foreign Affairs, Joseph E. Farrell said that violence and personal assaults have no place in Caribbean politics.

He maintains “that there can be no compromise on this front as such acts of violence are a threat to national security and do not in any way help our democracies.”