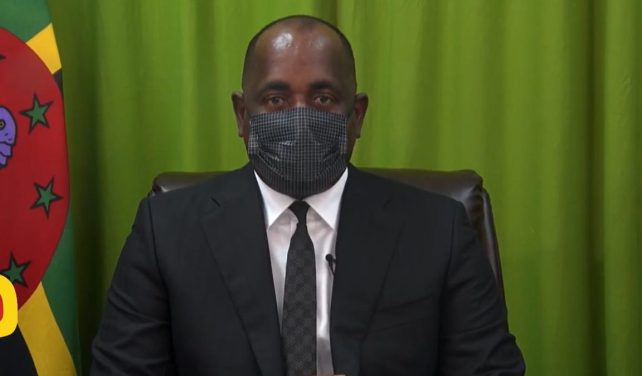 While Prime Minister Roosevelt Skerrit says he would be honored to serve as the President of the Commonwealth of Dominica, he has dimisssed claims that he will replace H.E Charles Savarin in 2023, as according to Skerrit, his devotion at present lies with the Dominica Labour Party (DLP).

Many have speculated that Skerrit would exit his post of Prime Minister to serve as President of Dominica in the not too distant future. However, when questioned about that possibility during his weekly program, Annou Palé, Skerrit said, to accept the position at this time would not be in the best interest of his party.

“Being the President of the country would be an extraordinary honor to be the Head of State of our country. I believe this is the ultimate position in the country but I am a politician and I have been at the helm of the Labour Party since 2004 and I do not believe that me becoming President at this time would be helpful to my party, so I would not accept,” he declared.

Skerrit did not dismiss the idea of becoming President “down the road” but he said 2023 is too soon.

“These views on people’s minds of Skerrit becoming the President, maybe down the road if this post is offered to me yes, but the current President terms ends in 2023 and that is before the next election and for me to sit in the State House and you have an  election campaign going on and all I can do is to listen to DBS radio, I don’t see myself doing this,” the DLP leader remarked.

Though the Prime Minister holds the view that he is quite capable of filling the post of President of Dominica, he said he would deny any opportunity which prevented him from wearing his  “it is safer with Labour t-shirt” and promoting his party come the next general election.

“I am labour to the bone and I want to ensure that Dominica is protected and have the best party to manage the affairs of Dominica, which is the Dominica Labour Party,” Skerrit stated.

Whilst publicly voicing his loyalty to his party, the DLP’s leader is uncertain how long he will remain at the helm of the party.

“It all depends. There are many different capacities which I can serve in within the party but my commitment, first and foremost, is to Dominica and secondly to the Dominica Labour Party,” he noted.

The nation’s leader continued, “I need to ensure that this party remains in government because when you look at the history of Dominica, every serious intervention that has been made in Dominica is by Labour.”

According to the prime minister, the next general election which is constitutionally scheduled for 2024, is a secondary thought as at present, his focus is on advancing the goal outlined by his party of becoming a dynamic Dominica and successfully navigating through the pandemic.

He said no matter what position he holds, he wants to offer his continued service to the party that has been “so kind to me and so good to me. I believe I owe it to the party and the supporters.”