Leader of the Opposition, Lennox Linton, has accused Prime Minister Roosevelt Skerrit of being a ‘proud violator’ of the Constitution of Dominica, saying that he was not properly consulted in the appointment of a Deputy Chief of Police as mandated by the highest law of the land.

The present Deputy, Hobbs Jno Baptiste went on vacation leave on September 5, 2016, and Linton said he was only informed of the matter by a letter from Skerrit on the same day.

Linton said on privately-owned Q95 on Thursday morning this is contrary to the Consitution of Dominica which mandates that the President appoints a Chief of Police or a Deputy Chief of Police based on advice from the Prime Minister after he has consulted with the Leader of the Opposition and the Public Service Commission.

According to Linton, he received a letter from Skerrit from on September 5, the same day Jno Baptiste went on leave to inform him of the matter (the letter is below).

A section of the letter reads, “In accordance with Section 92 (1), of the Commonwealth of Dominica Consitution, I wish to inform you that I shall advise the President to appoint Mr. Davidson Valerie to act in the position of Deputy Chief of Police.”

Linton pointed out such a letter does not amount to consultation.

“Clearly, this is not consultation and I want to make it clear that consultation is not what Skerrit thinks it means or wants it to mean in his own politically driven war against the Constitution, the supreme law of the Commonwealth of Dominica,” he said. “We are not saying to Mr. Skerrit that consultation means that he must act on the advice given but the as the person who has a duty to consult, he is under a legal obligation to seek advice or an opinion on his viewpoint or proposal before he decides to advise the president. That is what the Consitution provides.”

Linton pointed out that regional courts have been taking note of what proper consultation is all about. He pointed to a case in St. Kitts, Shawn K Richards VS Consitution Boundaries Commission, where the idea of “proper consultation” was addressed.

Linton stated it reads, “Consultation must be undertaken at a time when proposals are still at formative stage, it must include sufficient reasons for particular proposals to allow those to be consulted to give intelligent consideration and an intelligent response. Adequate time must be given for this purpose and the product of consultation must be conscientiously taken into account when the ultimate decision is taken.”

He argued that as Prime Minister, Skerrit is “duty bound to let the leader of the opposition know in clear terms who he plans to advise the president to appoint and why, with enough relevant information on the potential appointee to allow the Leader of the Opposition to fulfill his constitutional responsibility with intelligent response that must be subject of conscientious consideration before the Prime Minister gives any advice to the President.”

“That is the process. That is what the Constitution mandates,” Linton noted.

He said Skerrit “continues to insist no law, no Constitution can prevent him from doing as he pleases.”

“He seems to be a proud serial violator of the Consitution and he refuses to relent,” he said. 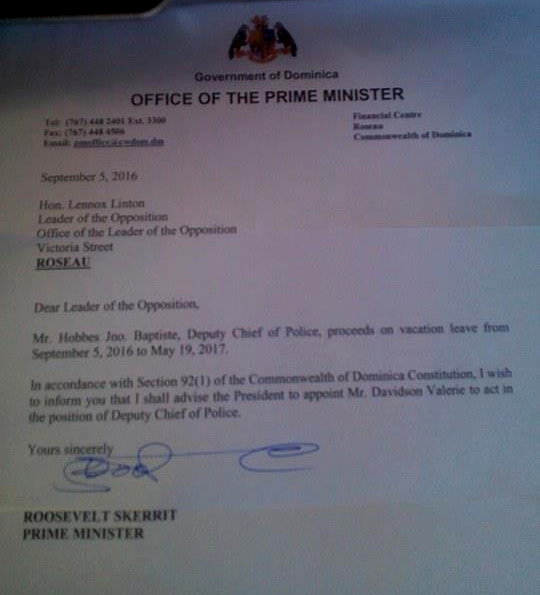