Former Prime Minister, Edison James, has sought to explain a letter he wrote to US officials concerning the construction of an international airport in Dominica.

The matter was brought to the fore recently when Prime Minister, Roosevelt Skerrit, blamed James for Dominica not having an international airport.

“We’ve spoken about International Airport for a very long time. Dame Eugenia Charles, may her soul rest in peace, because of our friendship with the US Government promised to assist with the International Airport…Mr. James, the then leader of the opposition, wrote to the Americans to say to them that they should not come to build an Airport because it would interfere in an election in Dominica,” Skerrit said at a town hall meeting held on April 2, 2017.

It appeared that the Prime Minister was referring to a letter written by James dated February 7, 1990 to the American Charge D’Affair in Barbados mentioning the project and saying that it could become embroiled in an upcoming general election and would do irreparable damage to it.

Speaking on Q95’s The Talk on the Block on Friday afternoon James explained the rationale of his letter, which was also mentioned in the correspondence to the American officials.

“We heard the Americans were going to move here to move earth,” he stated. “Our position to the Americans was, look, in the absence of a development plan including an appropriate financing plan, any earth moving would be a gimmick, an election gimmick and that is what it would be.”

He added, “If they are saying that we caused the Americans not to come and build an airport while we were in opposition then I can tell you it suggests that we were regarded much more highly than any government that was in office at the time.”

James is convinced that the Dominica Labour Party, under Skerrit, will never build an international airport in Dominica.

“As long as Mr. Skerrit is Prime Minister of this country, we will never have an international airport because he cannot bring himself to build an airport on the only site that is suitable for an international airport in Dominica as has been identified,” he stated. “It was identified at the time the United Workers Party was in office, so Mr. Skerrit feels that if it is built, it will always be associated with the United Workers Party. So he will never build it.” 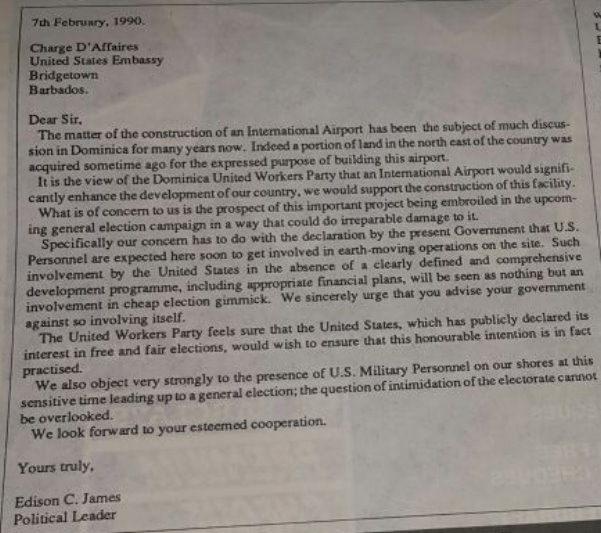