Supporters of the United Workers Party have been told that the opposition will be attending parliament and is prepared to debate the supplementary estimates of over EC$50-million.

However, the party remains unhappy that its members will be unable to ask questions during the sitting.

The leader of the Opposition, Lennox Linton, addressed party supporters at the Peebles Park on Thursday 26th November 2015, just before Parliament got underway.

The Opposition and the Speaker of the House of Assembly, Alix Boyd Knights are at loggerheads over questions that the Opposition submitted for today’s sitting that were pushed to the next sitting of parliament.

According to the Opposition, this is the second consecutive time they have been barred from asking questions by House Speaker Alix Boyd-Knights, but in response, she argued that she is only obeying the Standing Orders of Parliament.

“Let me be clear, we are going to the parliament this morning to do your business,” Linton said. “We may not be able to ask the questions that we proposed to ask, but we are going to be able to debate the supplementary estimates where they are seeking final parliamentary approval for overspending and underfunded capital budgets, they are going to seek the authorization to overspend it because we have overspent it by over $50 million. So we have a lot of things to talk about.”

Linton also said his team is “tired” of being pushed around in the country’s parliament.

“But let me tell you something, we are getting sick and tired of being pushed around as your representatives in the parliament,” he stated. “We are going to parliament this morning, not to do our personal business, but to do the business of the nation of Dominica. The rules of parliament provide that we in the course of doing your work as your representatives in parliament, will be able to ask questions of ministers of government about the way in which they are running your affairs, the affairs of the nation-state of Dominica.”

He said in all parliamentary sittings in the history of Dominica’s independence, opposition candidates have been able to put forward questions for the specific meeting of parliament to which they were invited.

He added that Dominica does not have a schedule of regular meetings of parliament like other countries in the region, hence the relevance of the questions may be lost when the next date is announced.

“It is totally and absolutely unacceptable that a Speaker, in collaboration with a Prime Minister, could be using rules in the House, the minimum requirement rules against the parliamentary opposition seeking to pursue its right to do the work of the people in parliament,” he remarked. “And that is why we have called you here this morning. That is why I, as leader of the parliamentary opposition, wanted to see people in my face and wanted to hear people respond when I say, ‘the worse speaker, the worse speaker, ever in this house.’ I wanted to be reminded that I am not alone and Pat Aaron and Peter Prosper were not alone in their observations in that calypso some years ago.”

“Dominica’s democracy is under threat this morning and we are determined to stand up to a Speaker that is hell bent on ensuring that the questions that need to be put before the Prime Minister and the Ministers of Government are not asked,” he remarked. “But we will ask the questions when they throw us out of the House, we will go on the street corners because we believe that it is the time that the government listens to the people of Dominica.”

He thanked those gathered for coming and said despite the small numbers, the “hopes and the aspirations of the Dominican people rests upon the fact that we are here this morning, we are here to send a very strong message to this government of Dominica that we will not tolerate what they continue to do to our democracy.”

One of the questions that the Opposition said that they wanted to be asked has to do with how the government going to raise the EC$1.3-billion, needed for the reconstruction of the country following Erika and how given the allegations of the corruption that are swirling around Skerrit, his connection with Ng Lap Seng and how is he going to find the courage to face international leaders and ask them for assistance. 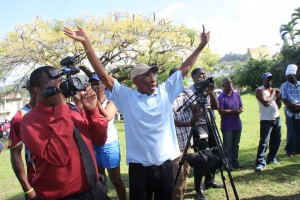 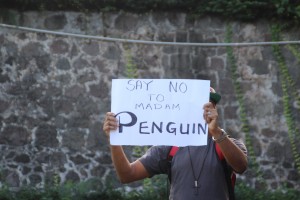 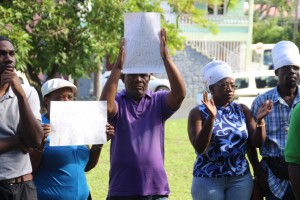 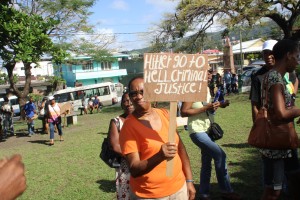 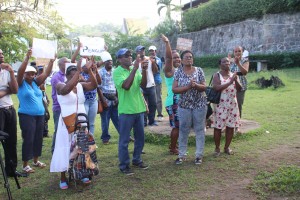