Days after the ruling Dominica Labour Party (DLP) claimed that leader of the United Workers Party (UWP), Lennox Linton, plagiarized the work of Allen Chastanet of the St. Lucia UWP and others, the UWP is alleging that prime minister, Roosevelt Skerrit, is also guilty of the same trangression.

However, the DLP was quick to shoot down the allegations saying what is being pointed out by the UWP is “standard practice and bears no similarity or relation to the wholesale lifting of another’s personal perspective, vision and program and passing it off as your own.”

For the past days Linton has been embroiled in the controversy which was first made public on Kairi’s Next Level Program. A number of documents have since then been produced which the DLP said is clear evidence that the UWP leader is guilty of plagiarism.

Last Thursday the DLP held a mass meeting meeting in Lagon, Roseau which focused mainly on the matter, pointing out that Linton must demit office because of the allegations.

However, days later, the UWP came out with its own allegations producing a number of audio and video clips which it says clearly show that Skerrit had also committed plagiarism and has used the work of others in his own speeches.

One such clip shows Skerrit delivering a speech which was similar to that of prime minister of Mauritius, Anerood Jagnauth.

The UWP is also alleging that Skerrit plagiarised the speech of the late prime minister of Barbados, David Thompson.

Thompson delivered a speech on April 15, 2008 on negotiations on forming a partnership between the EU and CARIFORUM, to include all CARICOM nations.

On April 23, 2008, Skerrit delivered a speech, which the UWP says is basically word for word from Thompson’s speech.

But in a statement on Monday morning the DLP flatly states that the UWP got it all wrong.

“The Dominica Labour Party decries with ridicule, attempts by operatives of the United Workers Party to play down the impact of proven allegations of plagiarism against the leader of that party, Lennox Linton,” the statement said.

According to the statement, the allegations pointed out by the UWP are nothing more than “established practice.”

“This is normal, established practice that should have been known to United Workers Party operatives, wanting to lead Dominica in the 21st century,” the statement said. “Anytime there are such international conferences, reports from various select committees are circulated to all presenters for the expressed purpose of inclusion in their various submissions and updates to the meeting.”

Concerning the speech by Jugnauth the DLP said,  “Consequently, there is evidence to show, that the said referenced updates on the Gatt/WTO negotiations and preparations for the Conference on Small Island Developing States, were contained in the speeches of several other speakers and leaders, including Mr. Jean Ping, then President of the United Nations General Assembly, the Right Honourable Prime Minister of Mauritius Sir Anerood Jugnauth, KCMG, PC, QC and President Tong of Kiribati. They all used the same or very similar language when they spoke at the referenced conference.”

In the case of the Thompson speech, the DLP said the very same principle applies.

“In the case of the Caricom address, the same principle applied where all leaders would have been quoting from the same brief, as provided by technocrats from the Caricom Secretariat,” the DLP said. “These are updates provided by the Secretariat for deliberate and authorized inclusion in the submissions of presenters. Such material therefore cannot be stolen, as it is freely given and made available to all persons down to address these conferences.”

The DLP stated that if the UWP was paying close attention “they would have realized that several presenters, other that Prime Minister Skerrit and late Prime Minister Thompson, included the same facts in their updates to the meeting.”

The party is claiming that what has been brought forth by the UWP “bears no similarity or relation to the wholesale lifting of another’s personal perspective, vision and program and passing it off as your own.”

The DLP stated that in any civilized country a politician who did what Linton did would have been fired by the party.

The DLP’s full is statement below.

The two diagrams below were produced by the UWP. 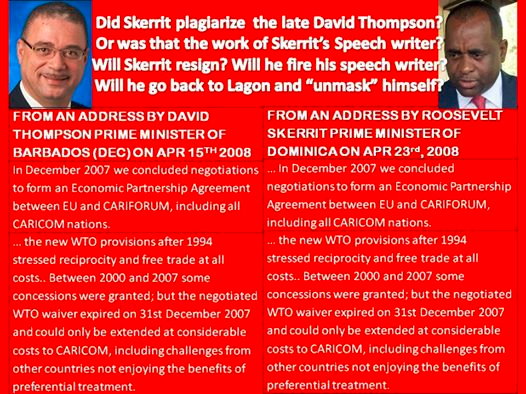 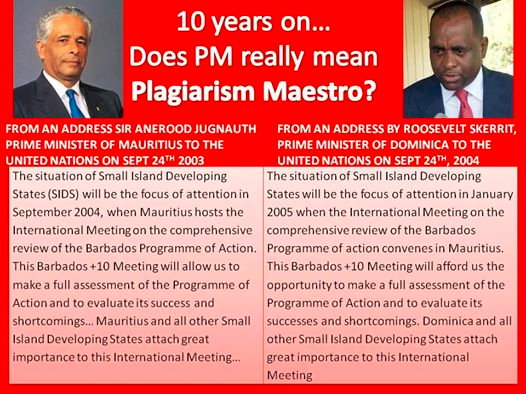 This video has been circulating on social media

Below is the full statement by the DLP.