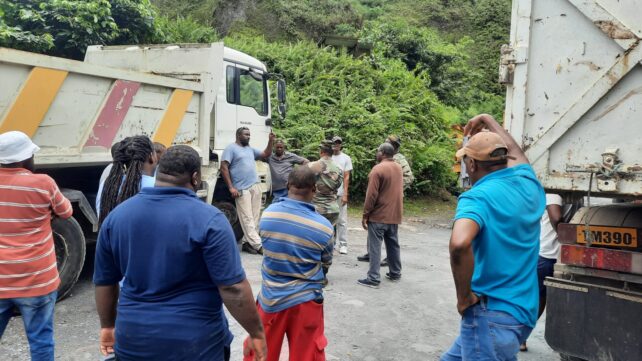 Frustration has once again reached boiling point for local truckers who have not been paid for their services rendered almost six months ago, and as a result, for the past three days, the truckers have been taking action to demonstrate their dissatisfaction.

At 6 am on Monday, June 13, several truckers blocked the entrance to Dominica’s main tarish pit in Pont Cassé, preventing eight foreign trucks from leaving and others from getting in. The truckers have insisted that they will only move when the quarter of a million dollars owed to them is paid.

President of the Tipper Truckers Association of Dominica (TTAD), Anton Laville, explained that following a six-hour “awareness action” taken by local truckers in November 2021 under the Canfield cliff, to highlight the non-inclusion of local truckers in the construction of major projects on the island, their services were engaged earlier this year by Chief Executive Officer (CEO) of Sotradom Jacque Gaddarkhan for the  East Coast road project.

“From February of 2022, we started work with the gentleman and his company and some of our truckers worked for a period of three weeks. However, up to this date, we have not received any payments from the company,” Laville informed Dominica News Online (DNO) during a live interview at the start of their protest action on Monday.

He continued, “For five months we have not gotten paid. Right now, the project is continuing, tarish is being hauled from the tarish pit and our trucks are parked. The banks are calling me in relation to the other truckers who are not paying their mortgage on their trucks and they even threaten  legal action. So today, we decided to block the tarish pit and  prevent any of the haulings and to get the attention of Mr. Jacque Gaddarkhan.”

Laville said that with the assistance of the association’s lawyer,  13 letters had been sent to Gaddarkhan, but to date, all attempts made to get the monies owed have failed.

The TTAD president further disclosed that they have written to the Minister of Public Works, Senator Cassani Laville, to apprise him of the ongoing situation. He holds the view that the authorities can intervene to stop the further collapse of the trucking industry in Dominica.

“We’ve been trying our best to avoid all of this; some people may call us cowards, but we’ve always been trying our best to get the best outcome and the simplest outcome from the situation,” Treasurer of the TTAD, Everson Magloire, told DNO. “I have made quite a few trips to the office after preparing the bills and I’ve been told that it’s the  government that has not paid. I’ve heard the cheques are signed but we just couldn’t get them at the moment, and more excuses.”

Magloire went on to explain that the issue of the lack of employment for truckers spans over a decade, however, he said the situation has worsened following the passage of Hurricane Maria and fears are mounting that the members are nearing the end of their tether.

“The way we feel is that somebody is profiting from our misery and it is not the banks, because they are calling; it is not our families, and it is definitely not us, so somebody has to be profiting under our misery and today we’ve decided that’s it. We need to have a clear shot at survival in Dominica, so we are not moving, because we too have families to feed,” Magloire insisted.

Following their awareness action last year, Prime Minister Roosevelt Skerrit met with the truckers and announced to the nation the establishment of a committee to propose rates that are “fair and reasonable” for the services offered by those in the trucking industry.

The executive member confirmed that members of the committee have since met and have agreed on some new rates, but these have not gone into effect as the issue of unemployment is still present.

Since the protest action began on Monday, the truckers have been offered a partial amount, but they have refused to accept it. Several truckers have also decided to sleep inside of their trucker for the past two nights, and remain resolute that they will not move unless all their outlined conditions are met.

Information reaching DNO on Wednesday afternoon indicates that the truckers have relented just a little from their hardline position of blocking all traffic in and out of the Pont Cassé tarish pit and have decided to allow access to local truckers seeking to transport tarish from the area for smaller projects on the island.

Magloire made it clear in an interview with journalist, Matt Peltier, that this concession did not apply the projects managed Sotradom.

“This morning after looking at the scene that one of our local truckers had to take her tarish from Portsmouth to bring right up the way here, we recognize that we are inflicting some pain on our own and that’s not the intention,” Magloire stated. “And therefore we’ve decided to make local access to the tarish pit, that if our local trucks want to go and get their tarish, to supply and to continue the construction industry around the country that uses the tarish, they are free to do so.”

However, the TTAD treasurer was adamant that no Sotradom trucks would be allowed to leave or to enter the tarish pit.

“The eight trucks of Gaddarkhan are not going to come out of the tarish pit and whatever we do here is only to give access for our local trucks who chose to go up to load their tarish up there,” Magloire insisted.

DNO’s attempts to get a comment from Sotradom’s management have so far been unsuccessful but we will continue our efforts to reach them as well as the minister responsible for Public Works.

The live DNO interview with some DTTA members can be viewed below.