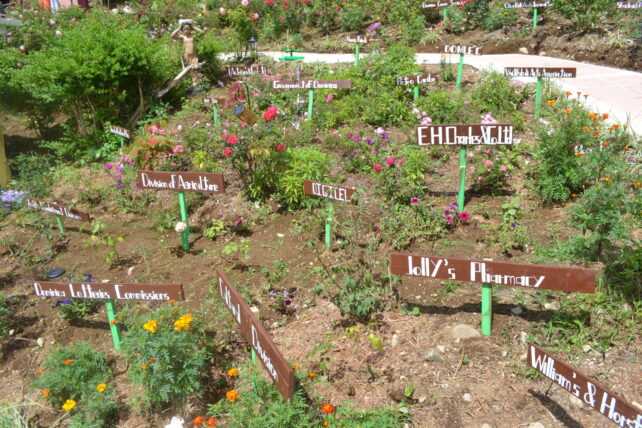 Following a six-year hiatus, patrons got a preview over the weekend of what’s to come, with a three-day precursor event dubbed the ‘Enchanted Garden’ on the new home to the National Flower Show.

The Giraudel Flower Show and Market Fair pre-event activities also included the launch, a creole brunch, and a tea party.

Speaking to Dominica News Online (DNO) on the final day, the Coordinator of the event Shirley Alexander,  expressed her delight in the work she and her team were able to pull off within four months.

“I am overjoyed. I really feel good knowing that many long hours, sleepless nights, and non-stop phone calls that we were able to pull this off,” she said. “It wasn’t easy but with the support of the village, the officials, family and other people, it was done.”

While the site was breathtaking, Alexander vowed that the best is yet to come and patrons will really be in for a treat come this October when the national flower show officially returns.

“By then, many of the flowers which you see planted here will blossom; our craft will be increased, our displays will be enhanced, so we say to the visitors to expect that their expectations will be met and even surpassed,” the cultural enthusiast declared.

She went on to note that the event is not only being staged for her community but for the wider public, to enhance the local products which Dominica has to offer.

Daily features included Market Fair on the Flower Show Site in Giraudel and the Heritage Site in Eggleston and other designated areas along the roadside, a wide range of local confectionary made by villagers, a photo booth,  music from local artists and DJs, an enchanted house, plant sales, an educational section on agriculture as well as a petting zoo to name a few.

Expressing her elation at the work which has been done, member of Parliament for the Roseau South Constituency, Chekira Lockhart-Hypolite, told DNO, “It’s a great day for me. I feel very happy, very elated, and excited. Words cannot express how I feel because I remember meeting with the Morne Anglais community tourism group, as well as the flower growers group three months ago and they said to me: ‘Parl rep it cannot happen’ and I said yes, it can. Once we come together, put our minds to what it is we have to do and develop a plan it will happen.”

She disclosed that in this year’s budget, there will be the inclusion of three villas for the 2.6-acre lot which is intended to attract local and foreign visitors. Plans are also in place to have an activity held every month to display to the public that the twin communities of Girudel and Eggleston are the “floral basket of Dominica,” the Roseau South Parl rep stated.

Prime Minister Roosevelt Skerrit who also spoke to DNO during live coverage of the event, commended the organisers and noted that the bar has been set for the main event which is just five months away.

“If we are in May, and this place is already like that, then one can only imagine what October is going to look like,” he said. “I believe that they’re going to really amaze us with more beauty and words cannot express how delighted I am in what I am seeing here. Being here a month ago and being here now and to witness the transformation,  is truly amazing, so we look  forward to October.”

Following a site visit earlier this year, the prime minister pledged a yearly subvention of EC$100,000 to the committee to maintain the flower garden.

He also gave a pledge of $15,000 to the organising committee for the purchase of seedlings and other necessary equipment.