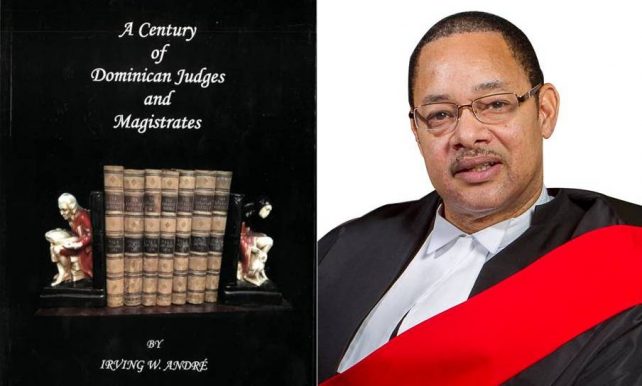 On March 28, 2019, at the University of the West Indies (UWI)  Open Campus,  Judge Irving Andre, launched A Century of Dominican Judges and Magistrates (Pont Casse Press, 2019). That work is a  masterful tribute to the guardians of rule of law on Dominica, and those legal luminaries born on Dominica, who served with distinction overseas. Judge Andre was introduced to a crowded UWI lecture hall by President Emeritus of the Dominica Academy of Arts & Sciences, eminent botanist, Dr. Clayton Shillingford. The audience listened to Judge Andre expound on the rule of law on Dominica, and his record of the legacy of our legal practitioners, with rapt attention. At the end of the lecture, a spirited exchange then ensued between Judge Andre and those in attendance. Also launched at the same event was Andre’s recent biography of Dominica’s former Premier Patrick John.

At a time when many questions are being asked about the quality of justice on island, it would do well to examine what rule of law means.

The rule of law essentially means:

In essence, rule of law is the temple within which resides the spirit of human freedom. Without rule of law there can be no freedom or democracy. The constitution must be respected by the commoner, the king, or the President in his palace. Even the Prime Minister of a nation is not above the constitution.

Human beings flee from nations where rule of law is trampled upon. Human beings  flee toward nations where rule of law is exalted, even where imperfect in its practice. Rule of law is the lubricant which facilitates local and global commerce, as it acknowledges the value of contracts, and the non-violent  settlement of claims sounding in tort, family law, or property. Without rule of law, contracts would not exist as society would be without the body of law to define contractual terms. Absent such a body of law, the law courts via which to resolve disputes arising from disagreements between citizens or businesses, would be shuttered. In nations where the temples to dispute resolution are shuttered matters are resolved via conflict in the streets, or the barrel of a gun.

Due process means the preservation of the rights of persons arrested to what is called due process. Due process is encapsulated within a bundle of rights that includes  that right to be free from unlawful searches, or seizures of ones’ property or person; the right  to request bail in a criminal matter; the right to a fair trial before an impartial tribunal; the right to appeal a verdict and  the right to counsel of one’s choice in the defense of such rights.

Andre is frank in admitting that the earliest manifestation of so-called “rule of law”  on Dominica was in defense of the odious slave state in the colonial era. The abysmal conditions of servitude under which enslaved Africans were held, or our native Kalinago ancestors subjugated, made a mockery of the liberty-loving spirit of the Magna Carta which underpinned British jurisprudence. It is clear that British law on Dominica was riddled with hypocrisy where held hostage to the diktats of the wealthy, or those of European heritage who constituted  the plantocracy. That easing of mockery dressed up in cute legalisms and towards a more just dispensation,  can be said to have started when Lord Mansfield opined in the famous Somerset case. “The state of slavery is so odious that nothing can be suffered to support it but positive law.” The ruling by Mansfield freed the enslaved African-American, Somerset, who had set foot on British soil and had been rescued and baptized in the Christian faith with the assistance of abolitionists such as Granville Sharp.

The 19th century saw the ascendancy of the abolitionist movement. There were uprisings which flickered on and off in Dominica’s mountainous fastness, alongside Sam Sharp’s rebellion in Jamaica which rocked that island’s plantocracy. There were numerous  other acts of passive and active resistance by Africans across the Caribbean – impelled by the example of the Haitian Revolution. Under such pressure the British ruling class relented. Slavery was abolished by act of the British parliament and took effect  1838. Thereafter, persons of African and native descent began their entry into the hitherto all-white  inner sanctums of the local legislatures and courthouses.

It is with that influx of persons of African descent, or “colored” races, that the common man begins to experience changes in his fortunes. Political power had brought with it, a transformation in society which opened the doors of liberty to those formerly dispossessed of it.

To that end, there arises in  20th century Dominica and the wider Caribbean a bodyguard of colored judges and magistrates whose value resided in their ability to pry open the doors of justice once mostly the domain of the propertied classes. It is therefore not by accident that the first Dominican lawyer of color who graduated from Grey’s Inn, was an organizer and presenter at the first ever Pan African Conference held in London in 1900. That lawyer, George James Christian later travels to Ghana. He settles in the town of Sekondi, founds a cocoa association, organizes the local Red Cross society, and  is an early sponsor of Achimota College. Christian never forgot his island home and donates an operating table to the Roseau hospital. He then built Sekondi House on Hanover Street, Roseau which still stands today. Christian who died in 1940, ends his career as a lawyer of distinction and an early advocate of Ghana’s independence while a member of the Gold Coast legislature. Andre informs us of also of other famous Dominican lawyers such as Ephraim Georges who chaired the commission of inquiry that led to the downfall of Jamaican Prime Minister Bruce Golding. Others, like Justice Phillip Telford Georges served as Chief Justice of Tanzania, Zimbabwe, and the Bahamas.  Former President of Dominica Dr, Nicholas Liverpool advised me that he served as legal advisor to Ghana’s legendary President Kwame Nkrumah before he was overthrown by a coup de ’etat.  By such a record, it is our hope that the younger generation of Dominican lawyers, magistrates and judges can be similarly inspired.

Some may derisively dismiss as colonial apologists, or “Afro-Saxons,” that breed of bewigged judges of ebony hue who arose in the 20th century. However, it is true to say that their studied approach, and  generally impartial judicial temperaments,  made for our English-speaking Caribbean to be a  relatively stable, and welcoming a place to visitors from the world over.  Indeed, as more local jurists took to the fore, due process of law during the development of the  20th Century Caribbean evolved toward an expansion of democracy, as opposed to its diminution.

Those who staffed our local law courts must be complimented where they served without fear or favor. Those men and women, such as the indomitable Ossie Lewis, the stern Glenworth Emmanuel, human rights activist and later judge Sir Brian Alleyne, the scholarly Dr. Nicholas Liverpool who was Dean of the UWI Law School at Cave Hill Barbados, Francis “Cosie” Harris, Cecil Arthur Kelsick, Carlyle Ashton Piper, Sylvia Bertrand, Davidson, Baptiste, Wynante Adrien-Roberts and many others, made our island a more civil place. Also mentioned in the book are local Senior Counsels Anthony Astaphan and Alick Lawrence whose place in the firmament of legal  services are well known.

Those local guardians of rule of law on our island have mostly freed us from the death-grip of wanton lawlessness, unbridled tyranny, caprice and/or  vicious whimsy. Dominica, and our Commonwealth Caribbean, have mostly been spared from the thralldom of dictatorship. That sense of freedom on our island is to be guarded jealously as it is that one intangible, yet attractive element of our society in an otherwise  troubled world.  For those who have served in buttressing our system of justice, much gratitude is due.  We must be proud of our greats in the field of law and take heed to follow the noble path they trod.

But we can only tender gratitude where we know of those who served, and the manner in which they served. And herein lies the value of this work by Dr. Andre; he has made the record. He has rescued from oblivion our legal service professionals whose lives, and contributions had – until this work – been relegated to the hidden cupboards of musty memory. Such amnesia as to the contours of our society, or the pernicious disregard of heritage, places the nation in peril. Such peril hangs over any nation darkly, because a nation robbed of the beneficial intellectual probing of its past is incapable of plotting a meaningful path forward.  If Dr. Andre has been remiss in this work is that he has omitted any reference in this book to  that intrepid Canadian judge of Dominican heritage with whom he is well acquainted. That judge, by his immense contributions to civic life, judicial leadership in the service of community development, and the authorship of so many books on Dominica, Dominicans and Caribbean history is worthy of the title: nation builder.  We here tender a warm salute to Judge Andre for his grand effort in illuminating the lives of those guardians of rule of law from our island, and so making the record for generations yet unborn.