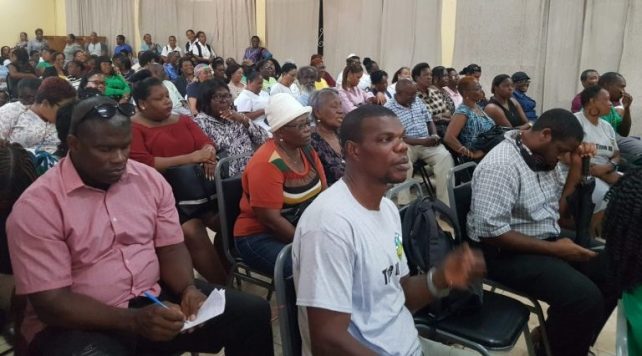 On July 1st this year, public officers will receive 1.25 percent salary increase as part of a three-year agreement which the Dominica Public Service Union (DPSU) has negotiated with the government of Dominica.

DPSU General Secretary, Thomas Letang told Dominica News Online (DNO) during an interview last week that the union and the government have reached an agreement for the 2018-2021 triennium which includes a 1.25 percent increase in the first year and in the second year, a one-time payment which is equivalent to one (1) month’s salary. There will be no salary increase for the third year.

“We consulted with our members and while what we really wanted in terms of level of the increase, a number of factors did influence our decision that has to do with the current state of the economy,” Letang stated. “In spite of what people may think, we believe that the economy is not in a good shape.”

He added, “The fact [is] that we haven’t had any new industry, a number of businesses have closed in recent times and we were impacted by Covid-19 and Hurricane Maria.”

“The education fund is another one where we provide soft loans to not only members, but also to the children of the members,” Letang noted. “So the government will be making the contribution towards that fund as well as $100,000 to our revolving fund.”

He stated that the government will also provide $20,000 annually to the union for the training of members.

According to Letang, the government has committed to take to the Dominica Parliament for enactment, no later than June/July 2021, a Bill which will significantly improve the terms and conditions of non-established public officers “in terms of their vacation leave, their sick leave, study leave among other things”

He added that the government was also receptive to the union’s proposal to facilitate assistance to public officers after a disaster that will not require them having to go to parliamentarians.

“Government has agreed to our proposal and that is to establish a fund and every year budgetary allocations will be made towards that fund and there will be a roll over, so whatever is left in a previous year will roll into the next year,” the DPSU official noted.

He said the fund will be managed by the establishment department and the oversight committee will consist of the union executive, the union representatives and permanent secretaries.

“The idea is to have that fund operated with no influence from the politicians,” Letang remarked.

The idea of subsidized housing for public officers was also discussed according to Letang and it is hope that before the end of the month, subject to the availability of the Prime Minister, the union will be meeting with the government to develop a concept for that particular matter.

“So far, nobody has lost their jobs and we want it to remain that way,”  said the union chief.