The Dominica Public Service Union (DPSU), the union that’s representing workers at the Public Works Corporation, has vowed that workers will stay off the job until their demands are met and someone in authority gives them some assurance as to “the way forward.”

Public works staff wearing protest t-shirts on Thursday, embarked on industrial action saying that they “are in limbo and are owed a few fortnights.”

“We have a number of issues that we have been confronted with for some time now, and I believe that the time has come when we can no longer tolerate it and take it. Something has to be done to send a clear message to the powers that be,” DPSU General Secretary, Thomas Letang, told reporters.

He explained that “a fortnight is being owed to the employees, three weeks of holiday pay owed them has not been settled and they have absolutely no idea when it will be paid since nobody has had any discussions with them or their union.”

Letang also mentioned the non-payment of Social Security contributions. “They are also experiencing difficulties in getting benefits because of that. We also have no idea as to who is in charge at the Corporation. There is no manager or an acting manager and we have no idea who to turn to and no one wants to take the responsibility,” he stated. 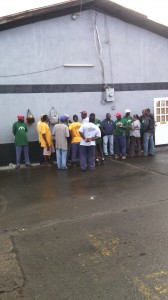 According to the union leader, the future of the staff is also a major issue. “The area is earmarked for a hotel and they have had discussions with people who have also come on the site to look at it and to date, no one has said a word to us on the matter,” he pointed out. “It is disrespectful to us and we will not tolerate it. We have written several times to management, it has reached the board and yet no action. They have also violated a number of provisions of the collective agreement. We will continue our protest action until we are satisfied that our demands are met,” Letang remarked.

Meanwhile Security Officer at the Corporation, F. Germain, told DNO that he is fed up and wants the matter resolved. “We are hurting, we are not being paid families are being disrupted, mortgages are not being serviced and look my girlfriend has threatened to leave me if I don’t come home with money,” he said.

He vows to continue in the protest until the workers’ demands are met.