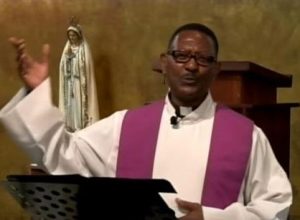 World Marriage Day was observed today Sunday, February 18, 2018. The Marriage Encounter and Engaged Encounter Movement brought together dozens of married and engaged couples for a celebration of the occasion at the Fatima Church in New Town.

Monsignor William Jno Lewis was the celebrant and the theme of his message was Covenant, Repentance and Baptism.

EDITOR’s NOTE: The messages published on Sunday Sermon are not restricted to Monsignor Jno Lewis and DNO welcomes other relevant and appropriate contributions from any other priest, pastor or spiritual leader.