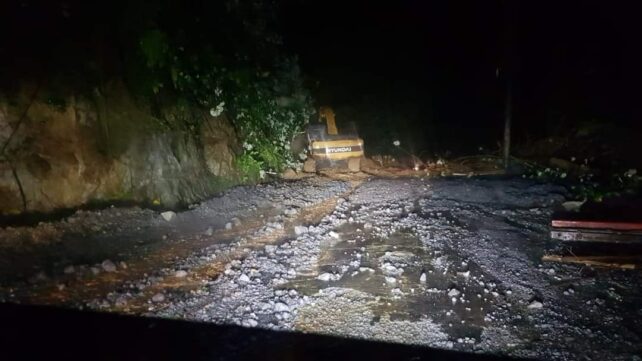 Minister for Public Works, Cassanni Laville, has commended residents in the east of Dominica for their “outstanding efforts” in clearing up roads after the occurrence of flash floods and landslides in various communities in that part of island.

According to reports, during the afternoon and early evening of April 29th 2022, there were incidents of flash flooding, drain and stream overtopping, landslides and rock falls which were caused by heavy rainfall.

Senator Laville stressed that people are the eyes and ears of the ministry and in that case, they were the hands, along with the machinery that assisted in clearing efforts.

He said the local effort was “absolutely outstanding in the East” as the people came out with the parliamentary representatives for La Plaine, Morne Jaune/Riviere Cyrique, Castle Bruce and Salybia constituencies coordinating the activities “on the ground” in their various constituencies.

The Minister also thanked the contractors who “worked in the night and into the morning” as well as the staff of the Ministry for their commitment in overseeing the clearing activities. Laville also expressed appreciation for the patience displayed by motorists despite the inconveniences.

“At the ministry level, we take a strategic approach in dealing with these situations. We closely monitor weather events and therefore have stationed heavy equipment at various locations to facilitate quick responses.  Crews were able to intervene very quickly, to clear roads and restore basic access to all communities,” he reported.

Laville mentioned “a few challenges” along the Castle Bruce road and the road to Good Hope. He said for the residents of Rosalie, Boetica, Laplaine and Delices, two large land slides occurred on that part of the road between Rosalie and the Castle Bruce/Rosalie junction.

“Notwithstanding the size of these landslides, access was restored relatively quickly to allow at least basic traffic flow… as it relates to Castle Bruce road, there is ongoing construction of that section, ” Laville stated.

At the time of his report, the Public Works Minister indicated that although the main slides had been cleared, “the ride is not very pleasant at this time, so drivers with lower wheel bases may want to use the Kalinago- Belles link road to access Castle Bruce until that surface has been improved.”

Laville also revealed that a 26-million-dollar strategic intervention is ongoing to incorporate resilience and to avert these various challenges associated with flooding.

He said this is the government’s largest recent road investment “to improve livelihoods for people, by ensuring access to the homes, work, goods, services and education resources at all times.”

Laville added that the government has already activated its structures and resources at the ministry Level to continue surveillance and assessment of all infrastructure.

” I wish to also assure everyone that the ministry of Public Works, will do everything possible to facilitate road access; not only post-disaster but to continue to improve our designs and to build safe robust infrastructure for our dynamic Dominica,” he stated.

Below are some photos which show scenes of the effects of the inclement weather, clearing operations and afterwards.