Prime Minister Roosevelt Skerrit has said that the 15 million dollar Roseau River Defense Project on River Bank is scheduled to be completed by early September, 2019.

Skerrit made this statement during a visit by Cabinet to the project site on Tueaday.

He said a promenade will also be added to the project which will enhance the aesthetics of the city.

“We have embarked on a very expansive river defense project overtime. We have approached  the construction of river walls on a face basis. One can appreciate the importance of these river walls to the safety of lives and property because we have the beauty of our river flowing to the city but that also brings itself at a certain risk and were trying to mitigate against these risks,” he stated. 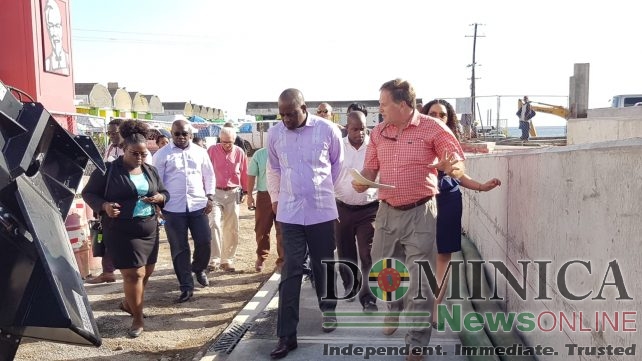 In addition to the river walls, the project also includes the creation of a riverside promenade.

“It is a project we have spoken about for some years now to enhance and to improve the aesthetics to the city and also the vending which normally take place along the river street in River bank area,” Skerrit stated. “You recall we had different shacks there over a period of time and clearly, these things are not sanitary; they are not places that we should be vending food and beverage. So the attention there is to build more aesthetically appealing shops and bars so the people could vend from this much improved facilities.”

The prime minister said the promenade will be used as a form of relaxation for persons and will help in creating a modern city.

He said this is a start in transforming Roseau into a resilient city which will also enhance the value of people’s property and commercial activity.

“I’m very excited about this project here today, it’s something that has been discussed for a while. It perfectly complements Roseau enhancement project which has been ongoing and this is all to increase or to enhance the aesthetics of Roseau central and so I’m really happy that this will create more of a city feel,” she said. “Its an area that is going to be a spectacle, its going to be laminated and its going to be some what of a commercial area and I’m sure the people of Roseau Central will appreciate this.”

She said Roseau Central has different cultures and the promenade would be a great opportunity to have a fusion of the various cultures in the city. 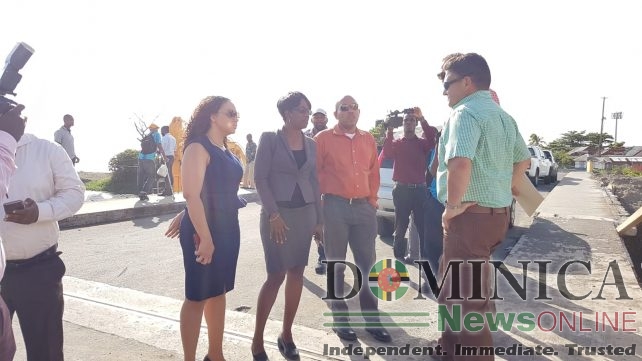