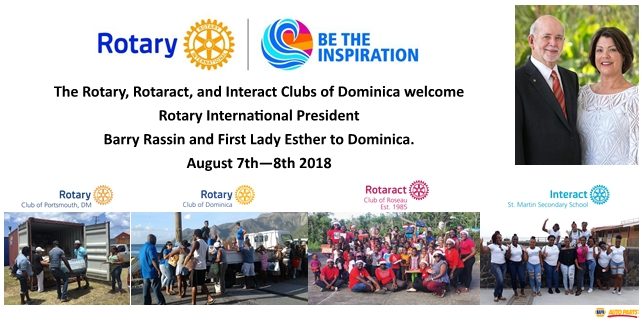 President of Rotary International, Barry Rassin, will visit Dominica on August 7 and 8, 2018.

The Rotary President is the highest ranking Rotary official to visit in the 44 years of rotary’s existence in Dominica. Rotary is a Worldwide Service Organization of 1.2 Million members.

The visitors will later meet with members of the Rotary Clubs as well as the Rotaract Club of Roseau and the Interact Club of the St. Martin’s Primary School at a cocktail event which will be addressed by R. I. President Barry. He will also pin new Rotarians of both Clubs as well as new Paul Harris Fellows. The Paul Harris Fellow program, named after Rotary Club founder, Paul Harris, recognizes individuals who contribute, or who have contributions made in their name, of $1,000 to The Rotary Foundation of Rotary International.

The following day, Wednesday, August 8, 2018, President Barry will call on the President of Dominica, H. E. Charles Savarin and Government Officials and will depart Dominica later that afternoon.