Skerrit was speaking at a DLP rally in Grand Fond on Sunday April 28, 2019 to launch Roberts as the new candidate for that constituency.

He said the new DLP candidates are motivated to serve and when they speak, they do so with sincerity and integrity, depth and determination.

“They (the new candidates) are a fine array of  new patriots that the Dominica Labour Party will be bringing your way in the weeks and months ahead,” he told the DLP gathering.

Describing Gretta as the ideal candidate to win the Morne Jaune/Riviere Cyrique Constituency, he suggested that the opposition to do the honourable thing and concede defeat and focus their attention on winning the other seats, “because Labour and Gretta are winning this constituency ladies and gentlemen”.

Skerrit said that the new candidates are “fresh, new, competent individuals who will take over the heavy lifting from those who will be relieved into more advisory capacities.” He was referring to the 13 members of his team who will not be part of the upcoming election. Many of them are duly elected parliamentary representatives and several are  ministers.

He told supporters, “We are facing perilous times ladies and gentlemen and Labour has the perfect team to lead”.  The prime minister said that with this team the future looks bright and Dominica will be in good hands. “We have not selected an old team, we have composed a purpose driven team – a team for the times”. 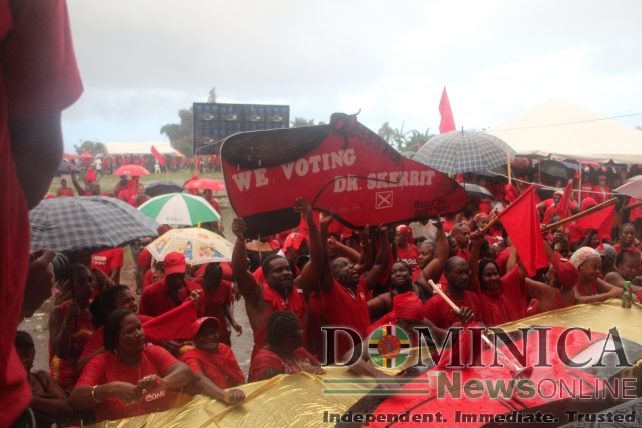 Skerrit also blasted the United Workers Party, in particular its leader, Lennox Linton. He said if Linton were to become prime minister, Dominica will be “hopeless and in despair”.

He asked where would Linton and the UWP get the money to finance any development in the country.

He asked of his rain-soaked supporters, “I want to know with whom they will form alliances.”

He said if the UWP gets into office, it will end the so-called RED Clinic and shut the doors to the office of the prime minister in the faces Dominicans and warned his followers about the  of the UWP in playing dirty politics tactics being employed by the opposing party in order to win the election.

“The propaganda of the other side look tremendous. They cannot fight us on our record of accomplishments , so they will fight us in the gutter. I expect them to resort to all kinds of skullduggery.” Skerrit stated. “They will hack email, tap into your Facebook and WhatsApp accounts and create all kinds of mischief to confuse voters.”

He advised his followers to resist and resent these types of behavior and told them to challenge the UWP supporters on the issues.

“Challenge them to tackle Labour on the issues; challenge them to come debate your vision for this country with us. Challenge them to be constructive in your criticism and to advance sensible alternatives. Tell them to say where the money will come from to finance all that they will promise,” Skerrit stated.

The DLP leader said the launch at Grand Fond signaled a new era of parliamentary representation with respect to the mode of representation at community level. 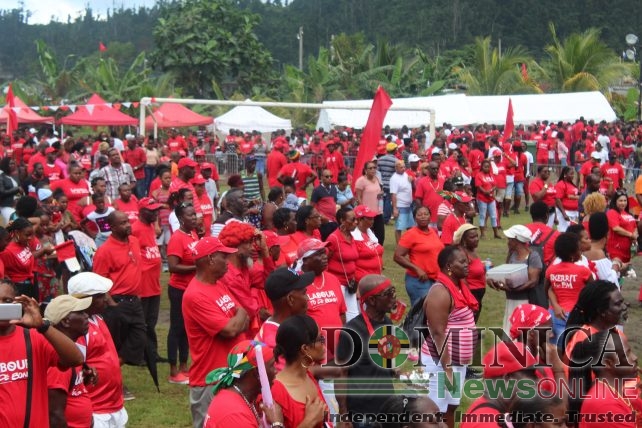