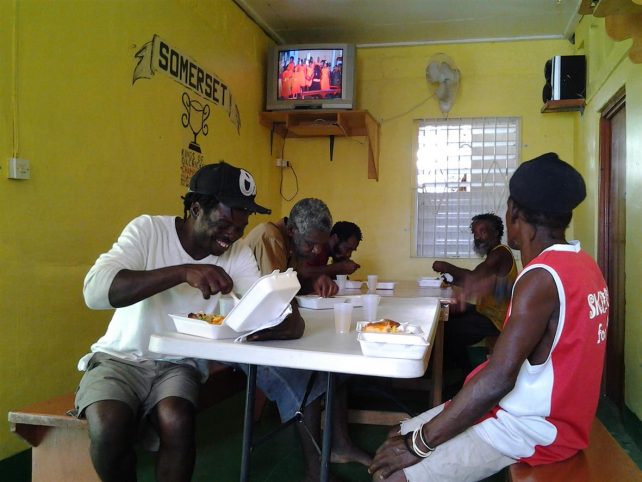 Twenty underprivileged and economically disadvantaged persons including 19 men and one woman in the Community of St. Joseph were warmly treated with a hot meal each on Christmas Day, courtesy Sagicor General Somerset of St. Joseph. This is the second consecutive year that the club was embarking on such a program.

The event took place at the Somerset club house where the recipients were also treated with some entertaining Christmas musical Songs. Second Vice President Alexson Thompson Alexander said “Christmas is a special time of year for giving and sharing with our less fortunate brothers and sisters and so he is indeed extremely happy to be part of such a wonderful gesture by the club.

On the other hand, First Vice President John Elue Charles remarked “In terms of the Club’s Social Enhancement Program it was a rather positive way to end the year 2016”. Earlier this the year twenty-two children between the ages of 6-10 participated in and graduated from an Information Technology and Sports Summer School Program hosted by the Club during the period July 11th to August 5th . The Program was entirely free. This year, the club also donated a Trophy to the Most Outstanding Young Cricketer at the Isiah Thomas Secondary School at its graduation ceremony, and that it was the 7th consecutive year that the club was making such a contribution.

Meanwhile Club President Ambrose Sylvester said “it takes a lot of dedication and commitment to keep things going, but the support received from benefactors including Sponsors Sagicor General Insurance, former members and some current and active ones continues to be very inspiring”. The St. Joseph based Somerset celebrated 53 years of existence in August 2016.