There is an emotional power in playing and watching Football that unite people when national teams are competing. But today those feelings, emotions and concept of nationality and who is eligible to represent a country in international competitions are sparking some uncomfortable and passionate debates. But FIFA, the World’s Football Governing Body has worked hard to establish policies and establish protocols to mitigate this sometimes vexing issue.

FIFA has clarify, re-clarify and restate those uncomfortable prevailing player selection schemes that ensure that the best players are selected regardless of the land of their birth. For many countries Article 17 of FIFA’s Regulations Governing the Application of Player Statutes means more competitive power to their teams. It also means the liberation of many of their compatriots in the diaspora to play for their parents and grandparents homelands.

Article 17 states that a player shall be eligible to play for a country if:

(a) He/she was born on the territory of the relevant Football Association (FA);

(b) His/her biological mother or biological father was born on the territory of the relevant Football Association;

(c) His/her grandmother or grandfather was born on the territory of the relevant Football Association;

(d) He/she has lived continuously for at least five years after reaching the age of 18 on the territory of the relevant Football Association;

Proponents of Article 17 point to the introduction of a new type of player raised and accustomed to a different footballing culture, benefitting from experience and discipline structure abroad and possibly drawing fresh attention to the developing country competitions. So far a large number of African and Caribbean nations with large Diasporas in both Europe and North America have outwardly and truly benefited from Article 17.

One example is the Jamaican Women’s National Football (soccer) team which is in a place it has never been before. The Reggae Girlz are on their way to FIFA Women’s World Cup 2019   in France to compete on that big stage from June 7 to July 7.  The ‘Girlz’ squad is the first Caribbean team to achieve a Women’s World Cup berth.  But it must be mentioned that about 70 % of that team is made of Diaspora players.

In the Russia 2018 World Cup, out of the 32 country teams that participated in the event, 22 of fielded at least one foreign-born player. This amounted to a total of 82 Diasporas who participated in the tournament.  47% of the English and Belgian squads and more than 78% of the French team are children of migrants.

Names like Ngolo Kante, Dembele, Umtiti, Pogba and Mbappe did not come from Marseille, Toulouse, Lyon or the vineyards of Bordeaux. These names most likely originated deep in the jungles of Francophone Africa.  In fact there is a running joke that France did not win the world cup- Africa did. Thanks to the Diaspora contribution, France’s World Cup trophy is worth more than $38 (U.S) million. Other direct and indirect benefits are realized as improvement in consumer confidence, increase in spending and tourism.

But detractors of FIFA’s Article 17 content that in its infinite wisdom and rush to ‘liberate’ members of the diaspora from international footballing purgatory, there are unforeseen consequences.  Geo-politically speaking, how far should developing countries FAs go in order to accommodate talent from the Diaspora who have may have not set foot in the country and/or have any  real ‘commitment’ to the national cause?  Also how does recruiting from the diaspora, ensure team cohesion whilst maintaining the integrity of the national team set-up?

A strong argument can be made that Diaspora players provide a ready and competitively talented pool of players of which most countries simply don’t have. Take the case of Dominican-American youngster Alanna Finn who was the Vice-Captain of Dominica’s U-15 National Girls’ squad which competed in CONCACAF (Confederation of North, Central America and Caribbean Association Football) U-15 Tournament in Florida in August 2018.

In preparation for the tournament and to know her team mates, coaches and managers on a personal basis, she spent the month of July training with the team in Roseau.  Prior to that tournament, she made her debut at 14 years old playing with the senior Dominica team at the Caribbean World Cup Qualifying Tournament in Trinidad last May. Her sister Sari represented Dominica in April, 2018 on St. Kitts during the Caribbean Football Union Challenge Series. 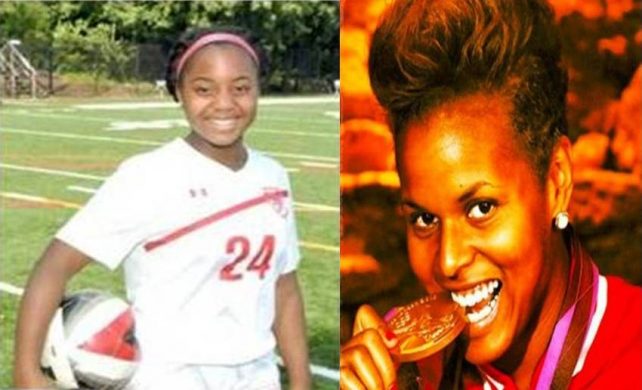 Additionally Dominican-Canadians who were all academic student-athletes at Southwestern Oklahoma State University, sisters Kira and Kylee Bertrand, have played for Dominica for more than five years along with their cousin Nati. Whatever l success the squad has enjoyed can be attributed to their invaluable contributions and leadership on the pitch.

Another Dominican-Canadian who has achieved much success on the international Football stage is Karina Leblanc.  She was a member of the Bronze-winning Canadian Olympic Women Football Team at 2012 Olympic Games and represented Canada in four World Cups. She spent her early life in Goodwill and attended the Convent Prep before migrating to Canada at 8 years.  She has arranged coaching football sessions in Roseau with young girls.

In her new role as Head of CONCACAF Women’ Football, the Miami based LeBlanc will focus on developing women’s football throughout the entire region and increasing opportunities for women in all areas of the sport. From goalkeeper to host, broadcaster and motivational speaker, she has travelled across the world to raise awareness about the game as well as the importance of women’s empowerment, especially through football.

But not all diaspora players who are selected by the Dominica Football Association (DFA) have had the opportunity to play for Dominica due to road blocks and red tape in obtaining Dominican passports. This writer interviewed at least three Diasporas families who said that immigration authorities and government officials have given them the round around to obtain passports for their children to play after they were selected by DFA.  One dad says that unlike St. Lucia, St. Kitts and others who abide with Article 17 and welcome Diaspora players with open arms, Dominica seems to be exception.

But has DFA has reached out to  high and powerful FIFA and/or CONCACAF offices to intervene in this matter or has it issued a press release or held a news conference regarding this myopic condition? Or is DFA taking the easy road not wanting to upset the political ‘apple cart’?  Or is it a priority to be more competitive in international competitions by acquiring the players who give Dominica the best chances of victory?  Can the DFA find itself in danger of being visited by FIFA   for not fulfilling one of its important and popular mandates regarding article 17?

In any event, the future will be a delicate balancing act-recruiting from the diaspora. But DFA will have to ensure team cohesion whilst maintaining the integrity, strength and competitiveness of the men and women national Football teams’ set-ups.