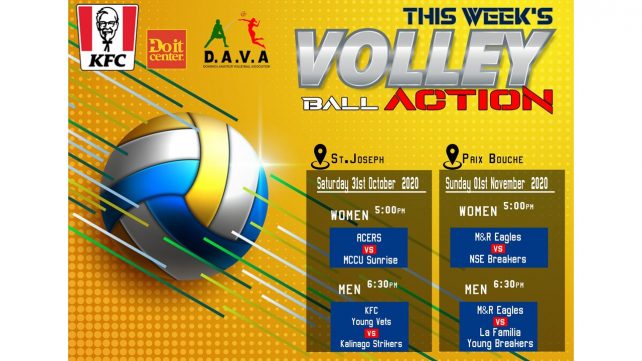 The large Portsmouth home crowd was left with mixed feelings in a double header on Saturday
evening as both their Male and Female teams went up against the MCCU Sunrise from Marigot
in the KFC DAVA national volleyball league.

Ace was the name of the game as the NSE breakers recorded a total of 21 aces throughout the
game with top scorer Alliyah Prince landing 6 aces along with 9 kills, Sherma Prince with 8 aces
& 5 kills, while Danitha George also had 6 aces.

The Signman Celtics, coming off a loss in their last game, came in guns blazing from the start, taking the first
& second sets very convincingly (𝟐𝟓-𝟓𝟓, 𝟐𝟓-𝟏𝟔. Dr. Adis King Club One put up a fight in the 3rd set with
some well executed blocking, however fell short in the end.

𝐊𝐲𝐥𝐚 𝐖𝐢𝐧𝐬𝐭𝐨𝐧 and 𝐒𝐡𝐞𝐫𝐧𝐞𝐬𝐞 𝐉𝐨𝐬𝐞𝐩𝐡 were the stars of the night finishing with 9 kills each. Winston – (9 kills, 1 Ace)
Joseph – (9 kills)

In game two, the St. joseph crowd was treated to some exciting plays with huge hits, blocks, and stellar floor defense as the CELTICS men went up against the PSC Falcons. With fire power coming from all angles, CELTICS took down the falcons 3-0 in a very high energy game (25-23, 25-15, 25-10).