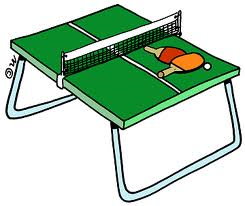 The Dominica team which participated in the 17th OECS Table Tennis Tournament returned home Sunday after what they considered to be successful event.

Dominica placed fourth in ladies team events and fifth in the men’s team events, which were won by Grenada and St Lucia Respectively.

Dominica’s Gem Eloi and Larrysa Dover won the Women Doubles,  Adrien Albert and Shermain Hyacinth of St. Lucia the Mixed Doubles, Kamal Hunte and  Romano Spencer of St Vincent the Men Doubles, Robert Ballantyne of  St. Vincent the Men Singles and Shermaine Hyacinth of St Lucia the Women Singles.  Gem Eloi was third in the women singles and she was unanimously voted as the most promising female player of the tournament.

Larrysa Dover came out of the shadows of the singles qualifiers to team up with Gem Eloi to play an exciting final.  They were able to overcome a two match deficit to win three games to two and win the championship, thanks to the coaching of male player Dane Taylor.

Veteran player Donald Corriette played well in some of his matches while Secondary Schools Table Tennis Champion Dane Taylor and runner up Briel Thomas provided some positive showings especially in the doubles matches confirming the schools program should be the foundation of all sporting programs.