Six athletes from Dominica  were selected for the CARIFTA trials in Trinidad and Tobago.

They are Luan Gabriel and Donny Joseph from Aspirers and Chelsey Linton and Ajani Reefe from Wesmar Rangers.

Below is a report of the two days of competition.

End of Day 1 Competition:
– Donny Joseph was seating in 4th place with a total of 2508 points which was 96 points behind 3rd place in the Open Boys Heptathlon.
– Luan Gabriel won her prelims in the 100m with a World Youth qualifying time of 12.0 seconds. She later returned to win the B – Finals in a time of 12.01 seconds.
– Ajani Reefe after a poor start clocked a time of 11.46 seconds in the U-20 boys prelims. He placed 3rd in his heat which was not good enough to take him unto the B – Finals.
– Dayne Alexander finished 4th in the B – Finals of the boys 1500m. He clocked a personal best time of 4:27.52 which was twelve seconds faster than his previous best.
– Lynus Joseph was scratched from the 1500m as he was in pain from a nail entering his foot the day before travel.

End of Day 2 Competition:
– Donny Joseph completed his seven events in the open boys Heptathlon with a total of 4080 points which moved him into 3rd place behind Barbados and Trinidad.
– Luan Gabriel placed 2nd in her 200m prelims with another World Youth qualifying time of 24.64 seconds. She later returned to finish 3rd in the B – Finals behind Barbados in a time of 24.99 seconds.
– Ajani Reefe placed 3rd in his 200m prelims with a World Youth qualifying time of 22.67 seconds. While this was a personal best time for him on the synthetic track it was not enough to take him unto the B – Finals for the U-20 Boys.
– Dayne Alexander clocked a personal best time of 2:04.96 seconds in the U-20 boys 800 meters semi-finals. He went on to the B – Finals and was only able to post 2:12.58 seconds.
– Lynus Joseph showed much determination in spite of the discomfort in his foot ran 2:11.28 seconds in the U-20 boys 800m prelims. This time was sufficient to take him unto the B – Finals. He made good use of the opportunity given to him and clocked a time of 2:09.59 seconds which was much better than the time he posted in the prelims.

The trials were held on March 2 and 3. 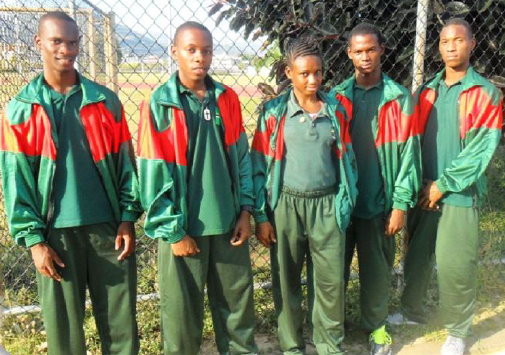