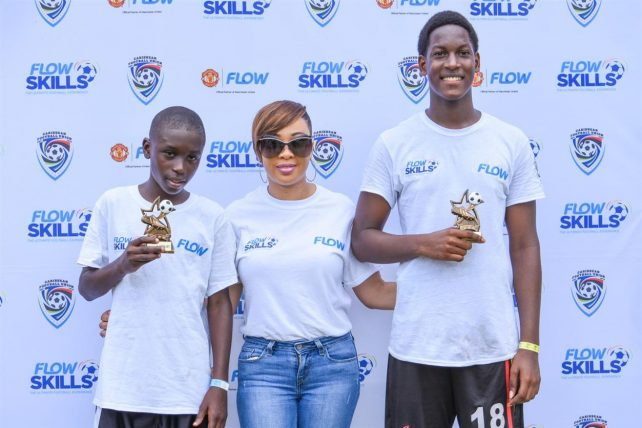 Roseau, Dominica March 22nd, 2018: Jamal Augustine and Adriel Lawrence left the island on Thursday bound for Trinidad to participate in the finals of the Flow Ultimate Football Experience this weekend.

The weekend’s program will include one-on-one training with Manchester United Soccer School Coaches among other major activities.

15-year-old Jamal Augustine of the Dominica Grammar School and 13-year-old Adriel Lawrence of the Castle Bruce Secondary School will also compete with the finalists from 13 other countries for the chance to be one of two players to win a once-in-a-lifetime VIP trip to Old Trafford, Manchester England with the opportunity to view a home game of Manchester United.

The two young footballers out-performed forty-two other players within the 12 – 16 age range during the Ultimate Football Experience preliminaries held at the Windsor Park Sports Stadium in Dominica March 10th.

The event featured three main skills including short passing, control, and dribbling. The skills were all taken from the Manchester United Soccer Schools’ programme and local coaches evaluated and ranked each player. The two winners were selected based on their rankings and assessments in each skill.

Jamal Augustine, who also represented the Harlem Sports Club at the prelims is being accompanied by coach Richard Victorine, and his mom Solange Francis. Traveling with Adriel Lawrence are Coach Stanton Seraphine and his mother Belinda Bontiff.

Flow extends best wishes to both young men as they participate in this life changing event.

The Ultimate Football Experience is a skills-based competition organised through a partnership between Flow and Manchester United.