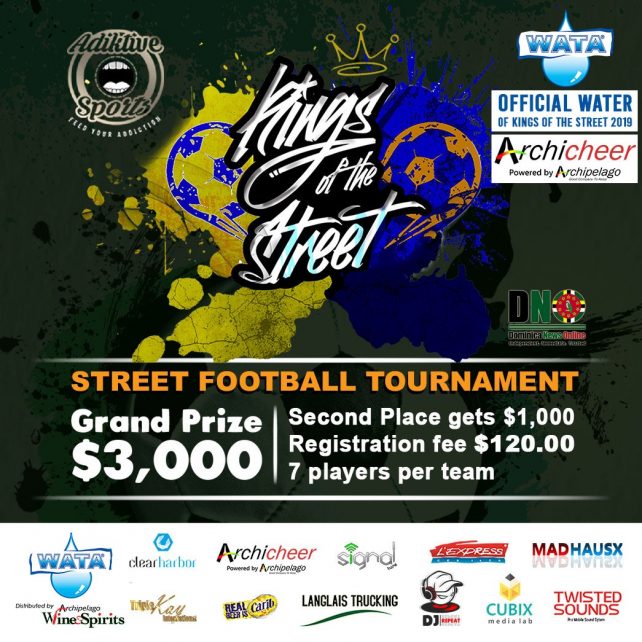 The other team to watch today is last year’s runner-up that is coming in to get some redemption and vie for another chance to compete in the championship rounds.

Aside from them, a number of other highly-skilled street football teams are expected to make today’s qualifier the most anticipated and most competitive thus far.

Here is the latest NEWS REPORT regarding our Kings of the Street tournament as heard on all top radio stations in the island. Congratulations again to all Qualifiers! GOODWILL, this Saturday, your time to show your skills for the entire country to know!!!

Posted by Addictive Football on Thursday, May 30, 2019

After two qualifying rounds in Castle Bruce and Mahaut and endorsements from two of the island-nation’s most popular entertainers namely Triple Kay International and Signal band, the hype surrounding the tournament has reached some street football-loving international players living on the island.  This prompted these players to form teams and signified their intention to join today’s qualifying Round.

When asked about the reason behind their impending entry to the tournament, they answered, “We want to have fun but most importantly, we will compete to showcase our skills and win the tournament.”

Two of these international teams named themselves, “The Doctors” and “ASUSM FC”.  They are expected to provide stiff competition to local street football teams and great entertainment to many sports fans who have been following the progress of this year’s edition of the Kings of the Street Football Tournament.

Meantime, the exciting qualifying round held in Mahaut last Sunday, May 26, 2019, produced two more teams that qualified to the Championship Rounds and they are the “Jimmit Ballerz” and the “YTS Ballers”.  They joined the “Komess Pack” who qualified during the Castle Bruce Qualifier. This year’s Champion will get $3,000.00 with the runner-up getting $1,000.00. Winners will also receive other special prizes.

For today’s event in Goodwill, additional entertainment will be provided by DJ Repeat during the duration of the activity that is projected to last for a number of hours. Drinks and other refreshments will also be available at the bar to be set up by Adiktive Sports, the organizer of the tournament.

ADIKTIVE SPORTS is a newly formed sports promotional group in Dominica composed of young but dynamic individuals passionate about sports and about harnessing its transformative power for positive social change.

Qualifying Pocket Tournaments have been scheduled in various zones around the country, namely Castle Bruce, Mahaut, Goodwill, and Point Mitchel. This will culminate with a 2-day FINALS EXTRAVANGANZA at Goodwill to showcase the TOP 12 teams from all over the country.