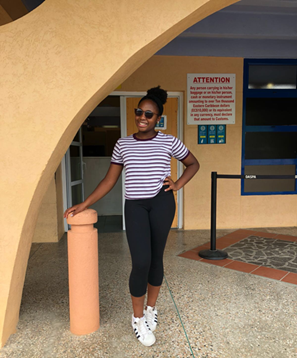 Fourteen year old Washington DC based Alanna Finn arrived on Dominica on June 26  to train with the National Under 15 Women’s Football team  until the end of July. The team will be participating in the 2018 CONCACAF (Confederation of North, Central America and Caribbean Association Football), Girls’ U-15 Championship Tournament in Florida in August.

Alanna who will be a freshman at DC’s St. John’s College High School in September is a Defensive Mid-Fielder who plays up with the U-17 Girls’ team in the Maryland Rush Montgomery Soccer League. This past May she played for Dominica’s National Senior Women’s Team and was the youngest player in the CONCACAF Caribbean World Cup Qualifying Cup Tournament which was held at the Ato Boldon Stadium in Couva, Trinidad.

According to CONCACAF General Secretary Phillpe Moggio, “This year’s Girls’ Under-15 Championship tournament which takes place at IMG Academy in Bradenton, Florida from August 6-13, exemplifies CONCACAF’s commitment to providing access to world class playing environments for more of our young players from across the region.  We’re especially excited to see so many young women from across the region get the chance to experience a top-level CONCACAF competition. This event will be a positive influence for these girls in both their playing careers and young lives.”

When she is not training she is enjoying the sights and sounds of the Nature Island of the Caribbean with her cousins in Roseau and the rural east. She is happy that the people and Dominica seem to be recovering in the best way they can from the devastation of the category 5 Hurricane Maria which directly hit and crippled the island last September.

Alanna looks forward to Bradenton with great anticipation and hopes Dominica has an excellent showing in that high level and competitive tournament.

Alanna is the daughter of Washington DC – based dentist, Dominican, Dr. Emanuel Finn.